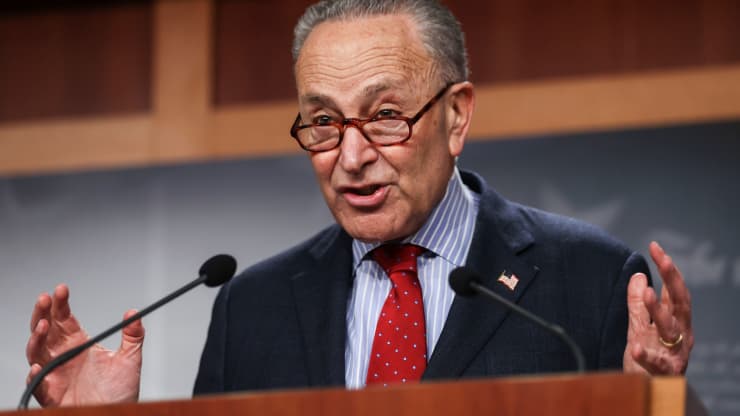 Posted By: Editorial Teamon: May 11, 2021In: PeopleNo Comments
Print Email

Senate Democrats moved Tuesday to advance a sweeping federal election reform bill, calling it vital to combating a wave of restrictive voting proposals around the country.

The chamber’s Rules Committee considered a version of the House-passed For the People Act, which aims to create automatic voter registration, expand early voting, require more disclosures from political donors and curb partisan gerrymandering, among a bevy of changes. The panel is expected to vote on sending the plan to the Senate floor after considering a string of amendments.

The bill has little chance of getting through the full chamber split 50-50 by party. Republicans have opposed the legislation, calling it a federal takeover of locally administered elections.

Lacking GOP votes, Democrats appear boxed in from passing the bill on their own. They cannot use special budget rules that allow certain legislation to pass with a simple majority, and do not have the support within their party to scrap the 60-vote filibuster threshold. Sen. Joe Manchin, D-W.V., has also criticized the bill, arguing Congress should make election reforms on a bipartisan basis.

Senate Majority Leader Chuck Schumer, D-N.Y., has insisted he will bring the plan to the chamber floor. The Rules Committee, where seats are split equally between the parties, could deadlock on whether to send it to the full Senate. Democrats could then advance the bill with a majority in the chamber — which may require a tiebreaking vote from Vice President Kamala Harris.

Underscoring the bill’s significance, Schumer and Senate Minority Leader Mitch McConnell, R-Ky., testified at the committee hearing Tuesday. The Democratic leader called the plan necessary to combat laws passed in Georgia, Florida and elsewhere that critics say will disproportionately impede the right to vote for people of color.

“Republican legislatures have seized on the big lie to restrict the franchise, and inevitably make it harder for African Americans, Latinos, students and the working poor to vote,” Schumer said. “Here in the 21st century, we are witnessing an attempt at the greatest contraction of voting rights since the end of Reconstruction and the beginning of Jim Crow.”

McConnell again downplayed the effects of the restrictive state laws, which sparked lawsuits from voting rights groups and criticism from major corporations and CEOs. He decried what he called “hysterical attacks” on the Georgia measures, which sets strict identification requirements for absentee ballots and limits drop-off boxes, among other provisions criticized by voting-rights advocates.

The Republican leader also pointed out that Democrats first moved to pass the For the People Act in 2019, before the post-2020 election laws took hold. McConnell described the bill as a power grab.

“Our democracy is not in crisis,” he said. “And we are not going to let one party take over our democracy under the false pretense of saving it.”

The legislation as passed by the Democratic-held House in March would implement automatic voter registration across the country. It would require states to offer 15 days of early voting and encourage no-excuse absentee voting.

The measure would boost public funding of campaigns — which has drawn particular ire from Republicans — and require disclosures from certain political advertisers and donors to “dark money” groups. It would also set up independent redistricting commissions to curb partisan gerrymandering of congressional seats.

Democrats have said huge turnout in 2020 showed pandemic-era measures including widespread absentee voting will make it easier for Americans to participate in elections. Voting-rights experts have cheered many pieces of the legislation but some have expressed concerns that the plan would create an administrative mess for state and local officials.

The tweaks would shorten the window for election officials to accept absentee ballots and resolve signature disputes, so they can certify results more quickly.

“You can simultaneously make elections fair and secure, while giving voters options that work for them,” Klobuchar said Tuesday in pushing for the bill.