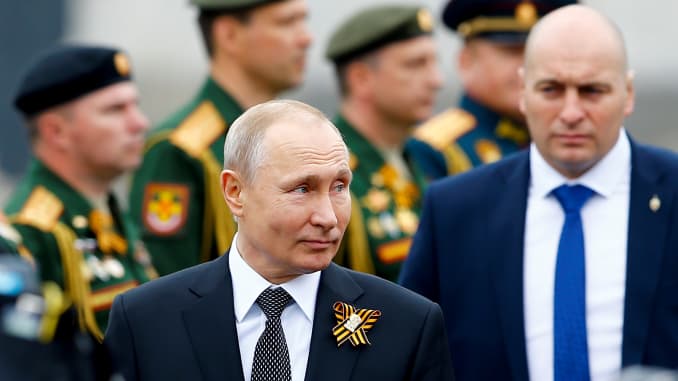 Biden says he is ready to ‘take further actions’ if Russia escalates against U.S., opens door to cooperation

President Joe Biden on Thursday addressed the sweeping sanctions his administration imposed on Russia, a move that seeks to address a litany of malign behaviors and is expected to peeve Moscow.

“If Russia continues to interfere with our democracy, I’m prepared to take further actions to respond. It is my responsibility as president of the United States to do so,” Biden said from the White House.

“I was clear with President Putin that we could have gone further, but I chose not to do so, I chose to be proportionate,” Biden said of the measures, adding that he did not want to “kick off a cycle of escalation and conflict with Russia.”

Biden also said that he proposed in a phone call with Putin that the two meet in person this summer in Europe to discuss a range of pressing issues.

In addition, the State Department announced the expulsion of 10 officials from the Russian Embassy in Washington.

Russia has long brushed off allegations of meddling in U.S. elections, human rights abuses, cyberattacks as well as reports of placing bounties on U.S. troops serving in Afghanistan.

Last month, the Biden administration issued its first sanctions on Russia over the alleged poisoning and subsequent detention of Putin critic Alexey Navalny.

Navalny, a leading critic of Russian President Vladimir Putin, flew to Russia from Berlin, where he spent nearly half a year recovering for a nerve agent poisoning that took place last August. He was arrested at passport control and later sentenced to more than two years in prison. The U.S. reiterated its calls for his immediate release.

The Kremlin has repeatedly denied having a role in Navalny’s poisoning.

Russia described the latest moves by the White House as a blow to bilateral relations and vowed to impose swift retaliatory measures. The Kremlin also blamed the United States for weakening the diplomatic relations between Washington and Moscow.

Also on Thursday, Biden signed an executive order that allows Washington to sanction any sector of Moscow’s economy, significantly broadening the scope of sanctions authority. Under this new authorization, U.S. banks are prohibited from conducting transactions in the primary market for new ruble or non-ruble-denominated bonds from Russia after June 14.

A senior Biden administration official, who spoke on the condition of anonymity, described the measure as having a rippling effect in the Russian economy.

The Central Bank of Russia also said on Thursday that it was carefully watching the market and that it was “ready to use the tools at its disposal in order to maintain financial stability.”

The sanctions package comes on the heels of a Tuesday call between Biden and Putin, the second between the two leaders since the Democratic president took office in January. Biden later described the call as “candid and respectful.”

On the call, Biden proposed holding a summit somewhere outside the U.S. and Russia “to discuss the full range of issues facing” the countries.

The Kremlin later on Tuesday said in a statement that Biden had “suggested considering the possibility of holding a personal summit meeting in the foreseeable future.”

A senior administration official, who spoke on the condition of anonymity, said that Biden informed Putin of his decision to impose the sanctions.

“We also want to be clear that we have no desire to be in an escalatory cycle with Russia, we intend these responses to be proportionate and tailored to the specific past activities, paths, actions that Russia has taken,” the official said.

The administration official declined to speculate on possible retaliatory actions Moscow would take on the heels of the sweeping sanctions.