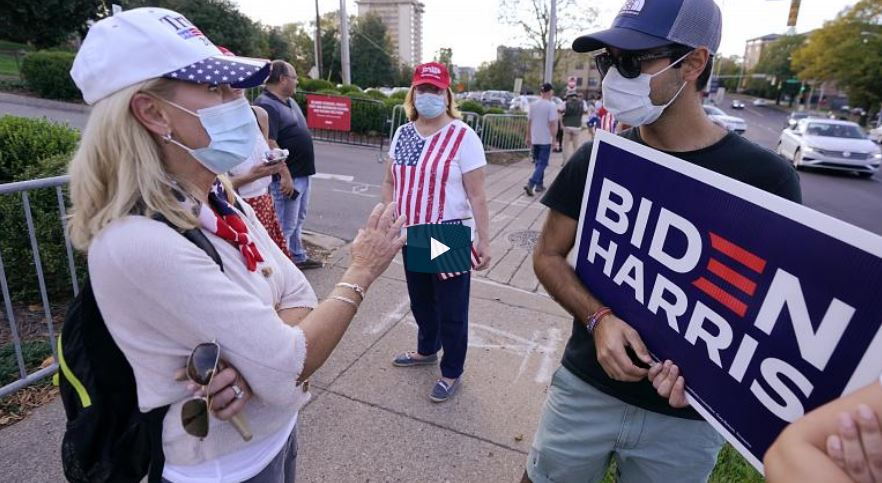 Any presidential election in the United States is bound to divide Americans over who should be the next host of the White House, but the upcoming elections seem to have divided the country more than ever.

From yard signs, to the Black Lives Matter movement, or the abortion debate and now the Coronavirus pandemic, it seems no one can decide how deep America’s divide is right now.

Take the simple campaign yard signs: police departments all over the country say they have never seen so many of them being stolen so far out from election day itself.

Some even had to put warnings on their yard signs to stop the future thieves from taking them away, as theft or vandalism of political signs is a crime in all 50 states.

“We have two parties that hate each other so much that they can’t put the country in front of themselves,” Jesse Kivenas from Racine, Wisconsin, told Euronews.

The impact of political opinion and gerrymandering

Personal political views and the practice of gerrymandering seem to be the root of the American divisiveness.

Gerrymandering is the power that state lawmakers have to re-draw state congressional districts to virtually ensure that their party stays in power in those districts.

In Wisconsin, local divisions are particularly strong. In March, the Democratic governor ordered a lockdown, and two months later, Republicans, who control the legislature, managed to get the order tossed out. Immediately, bars and restaurants filled up with mask-less customers.

Then the governor ordered bars and restaurants to be limited to 25 percent of their capacity — but again Republicans got the order tucked away.

This never-ending circle of local battles between the two parties plays right up to the race between the Republican president Donald Trump and the Democratic presidential nominee Joe Biden.

“There are very few undecided voters right now and the Venn diagram of the overlap of Biden and Trump doesn’t exist. So you’re either for him or against him,” said Paru Shah, a Political Science professor at the University of Wisconsin-Milwaukee.

Getting there has taken years, but will the 2020 presidential elections be able to change the course and unite Americans under the same banner?

Unfortunately, the unification of American voters doesn’t seem to be in the picture for the near future.

“It’s going to take someone special, to try to unite people together. I don’t know if we’ve got that right now,” Frank Dickinson of Port Huron, Michigan, told Euronews.

A Biden supporter even claimed that the violence observed before the election was very likely to repeat itself after the election.

“It’s too frightening to think of the divisiveness,” added Kathy Johnson, a Trump supporter.

The TOP platform is a unique hub in the digital marketing industry that you can ultimately give you the chance to connect with the right publisher spaces for your content, this is going to help you see more engagement and results in the end. 2 Reasons To Go With TOP For Content Placement Help