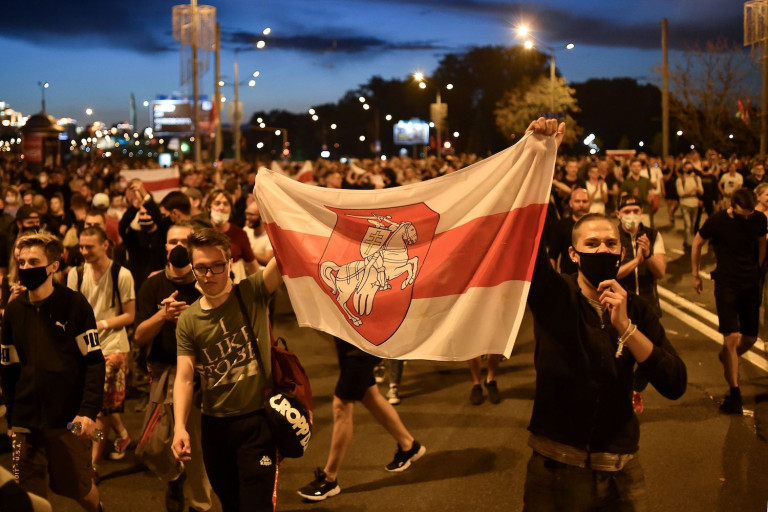 Five-term Belarusian President Aleksandr Lukashenko claimed victory in the country’s presidential elections on Sunday after facing one of his toughest electoral challenges since taking over the presidency in 1994. An official exit poll showed that he won 79.7 percent of the vote, a result wholly inconsistent with the level of opposition he has faced in recent weeks.

Mass protests broke out in the capital of Minsk and other cities after the exit poll was published. The situation quickly turned violent as protesters clashed with police. Police responded using water cannons, tear gas, and stun grenades to disperse the crowds. Lukashenko’s main challenger, Svetlana Tikhanovskaya, secured only 6.8 percent of the vote according to the exit poll; she rejected the official figures, declaring that “the majority is with us.”

Mounting a challenge. This was the most significant challenge Lukashenko has faced in years, due in large part to the country’s declining economic fortunes and the government’s underwhelming response to the coronavirus pandemic, as Foreign Policy’s Amy Mackinnon reported. Promising to free political prisoners and to hold new elections, Tikhanovskaya drew massive crowds to her rallies, reportedly drawing tens of thousands of supporters to one in Minsk in July.

Feeling the pressure, the government cracked down on the opposition in the weeks leading up to the election. Human rights groups said that more than 1,300 people were detained in the final weeks of the campaign, including election observers and members of Tikhanovskaya’s campaign team. Tikhanovskaya herself went into hiding the night before the vote after two senior staffers were arrested.

Russia’s watchful eye. Russia loomed large over the election campaign. Once considered a staunch Russian ally, relations between Lukashenko and Moscow have deteriorated in recent months as he has resisted attempts by Russian President Vladimir Putin to strengthen ties between the two countries. Lukashenko notably had 33 Russian mercenaries in the country arrested, claiming they were lying in wait and preparing to instigate a revolution.

Although Russia probably prefers Lukashenko to stay at the helm, the recent upsurge of unrest along its border may cause it to consider intervening the way it did after the events of the Euromaidan in Ukraine in 2014.

The World This Week

August 10-14. The U.N. Security Council is expected to vote on a resolution this week extending sanctions on Iran. Although U.S. Secretary of State Mike Pompeo announced that the United States would table a resolution to extend the sanctions, a date has not yet been set.

August 12. Taiwanese President Tsai Ing-wen will join the Hudson Institute for an online discussion on the diplomatic, security, and economic challenges facing Taiwan.

August 15. U.S. Trade Representative Robert Lighthizer will reportedly meet with Chinese Vice Premier Liu He to review the February trade deal between the two countries. The meeting has not been confirmed by either country.

Protests in Beirut. Political and social unrest has gripped Lebanon since last week’s deadly explosions in Beirut. Thousands of protesters took to the streets on Sunday, attacking a parliamentary precinct in the city with rubble from the blast and demanding the resignation of the government. The demonstrations turned increasingly violent as protesters attempted to gain entry into the legislature, causing security personnel to respond with force.

The government has been widely blamed for the accident after it was revealed that ammonium nitrate—a highly explosive chemical which helped intensify the blast—had been stored in the city with official knowledge, despite warnings from inspectors about the danger it posed.

Afghanistan releases more Taliban prisoners. On Sunday, the Afghan legislative assembly passed a resolution authorizing the release of 400 “hard-core” Taliban prisoners, considered the Taliban’s last condition before entering talks with the Afghan government. Shortly after the resolution passed, President Ashraf Ghani confirmed that he would “sign the release order of these 400 prisoners,” setting the stage for talks between the two sides to begin this week.

Prisoner releases had been one of the main sticking points since the peace deal signed between the United States and the Taliban in February. Sunday’s decision will bring the total number of Taliban prisoners released up to 5,000, meeting one of the key stipulations of February’s deal. U.S. Defense Secretary Mark Esper said on Saturday that the U.S. troop presence in the country would drop to less than 5,000 by the end of November.

U.S. officials arrive in Taiwan. U.S. Secretary of Health and Human Services Alex Azar touched down in Taiwan on Sunday for the highest-level meeting between U.S. and Taiwanese officials in decades and quickly praised Taiwan’s handling of the coronavirus outbreak. Officials will discuss ongoing pandemic relief efforts, as well as the broader U.S.-Taiwanese relationship in the face of growing assertiveness from China. Chinese officials were not pleased and have threatened “strong countermeasures in response to the U.S. behavior,” though what action they might take remains unclear.

Keep an Eye On

Shooting in Niger. On Sunday, a team of gunmen killed eight people in an ambush in Niger’s southern region of Koure. The dead included two Nigérien nationals and six French tourists. Neither Nigérien President Mahamadou Issoufou nor French President Emmanuel Macron identified the attackers, and no group has claimed responsibility for the killings.

Niger has become a hotspot for militant activity in recent years. Groups such as Boko Haram and affiliates of the Islamic State operate in large parts of the country, and their attacks have increased as U.S. and French counterterrorism operations in the local Sahel region have intensified.

Rajapaksa, whose brother Gotabaya is the current Sri Lankan president, made it known during the campaign that he wanted to win at least two-thirds of seats in order to have enough support to change the constitution and restore sweeping powers to the presidency. Although the SLPP fell just short of that threshold, it is believed the Rajapaksas will corral enough support from some of the smaller parties to push through their agenda.

An underground tunnel stretching from Mexico to Arizona discovered last week is believed to be the most sophisticated of its kind in U.S. history. Complete with a ventilation system, water lines, electrical wiring, and a rail system, the tunnel impressed U.S. authorities in part because it ran beneath ground considered highly unconducive to tunnel-building. Though extensive in its design, the tunnel was incomplete, so it remains unclear what its purpose was. Authorities speculate that it would have been used for smuggling once completed.