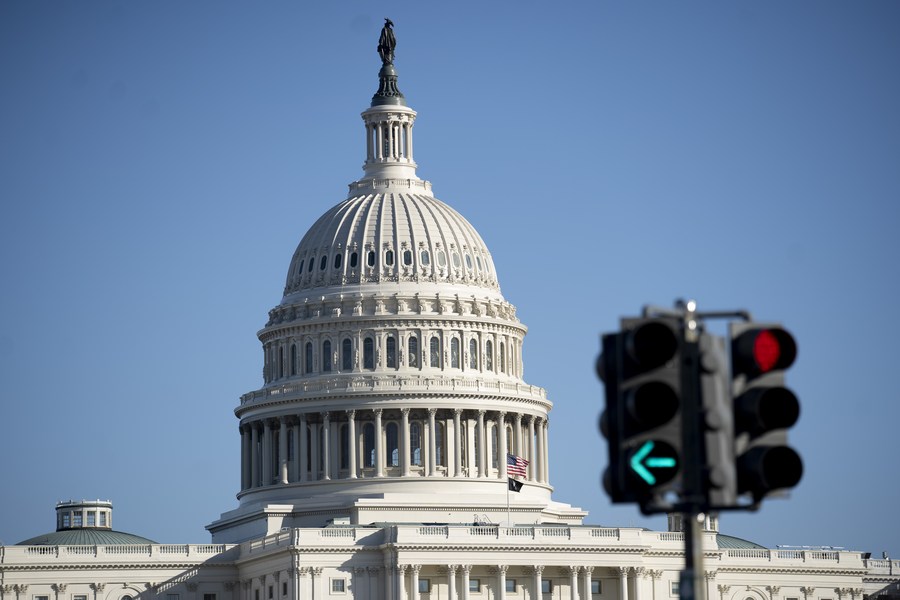 WASHINGTON, July 27 (Xinhua) — Sunday marks the beginning of the 100-day countdown to the 2020 U.S. presidential election while the country is still trapped in the raging coronavirus pandemic and nationwide protests against racial discrimination and police brutality.

With the clock ticking toward what may be the most complicated presidential contest in American history, both Democrats and Republicans are ramping up their push to get the keys to the Oval Office.

Nevertheless, as the coronavirus pandemic continues to sweep the nation, protests over racial injustice in several U.S. cities turned violent over the weekend.

Sitting president and presumptive GOP nominee Donald Trump, 74, didn’t mention the milestone directly on Sunday but lashed out at polls that have showed him falling behind his Democratic opponent, former U.S. Vice President Joe Biden, calling them “fake.”

“The Trump Campaign has more ENTHUSIASM, according to many, than any campaign in the history of our great Country — Even more than 2016,” he tweeted before claiming that battleground states, including Pennsylvania and Texas, will not vote for Biden, a 77-year-old moderate political veteran who has recently adopted several progressive policy proposals.

Biden, whose campaign is accelerating its staffing and television spending, tweeted “100 days” on Sunday.

“Folks, we have just 100 days until Election Day. Now, more than ever, we have to do everything we can to make Donald Trump a one-term president,” he said.

In the RealClearPolitics average of national polls, Biden leads Trump 50 percent to 40.9 percent as of Sunday. Meanwhile, polls conducted in some key battlegrounds, including Wisconsin, Michigan, Pennsylvania, Florida, and Arizona, also showed that Biden is ahead of Trump by at least several points. 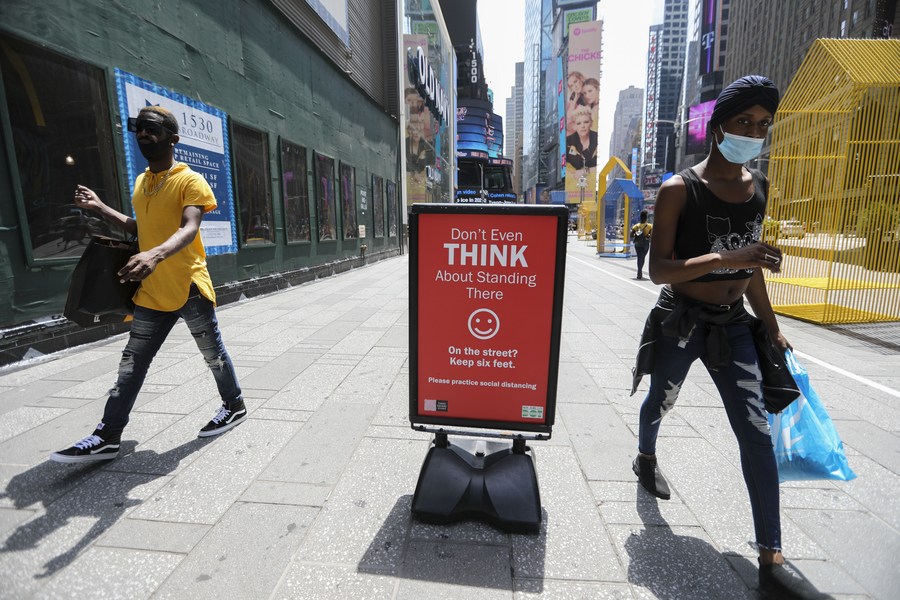 In an AP-NORC poll released Sunday, eight in 10 Americans said that the United States is heading in the wrong direction, the highest level during Trump’s presidency, while only about a third of Americans approve of his handling of the coronavirus pandemic.

Additionally, the majority of Americans have a negative view of how Trump is handling the economy, health care and education.

“This is a very unpleasant real-time look at what the future could be for President Trump,” said Tim Malloy, a polling analyst at Quinnipiac University, after the Connecticut-based polling center released its latest survey earlier this month.

Larry Sabato, director of the University of Virginia Center for Politics, however, urged caution in using polls to make predictions, tweeting on Sunday that “numbers are sand castles not stone monuments.”

Biden has seized the moment by sharply criticizing Trump’s performance during the coronavirus pandemic as well as his ability to steer the country out of the crisis, while Trump has repeatedly questioned Biden’s cognitive health, accused him of being a “puppet” of what he called the “Radical Left,” and highlighted their ideological differences in a highly politically and socially divisive time. 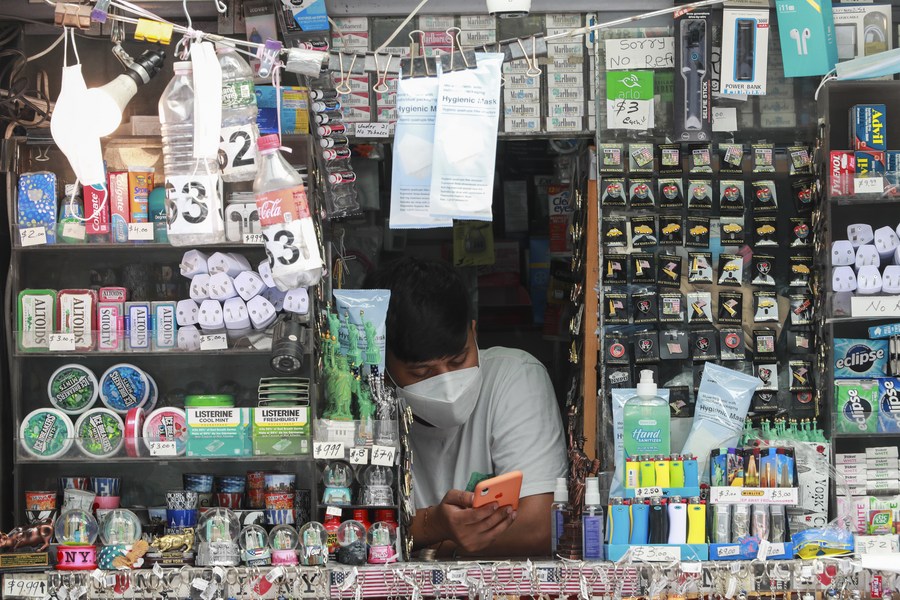 A vendor waits for customers at a kiosk on Times Square in New York, the United States, July 23, 2020. (Xinhua/Wang Ying)

Nate Silver, founder and editor-in-chief of FiveThirtyEight, a U.S. website focusing on opinion poll analysis, politics and economics, said on ABC’s “This Week” on Sunday that the coronavirus is “an extra complication” in this year’s presidential election.

More than 4.2 million people in the United States have been infected with the coronavirus, with some 146,000 deaths, according to a dashboard run by Johns Hopkins University. The pandemic continues to surge across the country, especially in some populous states, amid an economic recession.

“We found historically when there are lots of major news events and economic disruptions, an election becomes harder to predict,” Silver said.

“So while he’s clearly in trouble, I do not buy that Trump’s fate is sealed,” he said. “A lot could change in the next one hundred days. Things could get worse still for the president. But a turnaround in the COVID situation by the fall could make the election more competitive.”

The pandemic, which has plagued the United States for months, has forced the presidential and other campaigns to go virtual due to health and safety risks.

The Republican and Democratic national conventions, both scheduled for August, where Trump and Biden will formally receive each party’s presidential nomination, will take place on a smaller scale.

Trump, who has relied on campaigns to build momentum, had tried to restart in-person activities in June. But his rally in Tulsa, Oklahoma, the first of its kind in more than three months, met with a lower-than-expected attendance and led to coronavirus infections among campaign staff and Secret Service agents. Biden has said he won’t hold rallies during the pandemic.

Apart from the pandemic, the country has also been gripped by nationwide demonstrations against racial discrimination following the death of African American George Floyd in May.

A total of 45 people were arrested and 21 police officers injured on Saturday after a protest in the western U.S. city of Seattle turned violent.

In the Texas capital of Austin, a protester was shot dead by a person who drove through a crowd of marchers. In Aurora, Colorado, a protester fired a weapon, striking at least one person who was taken to a hospital, police said. 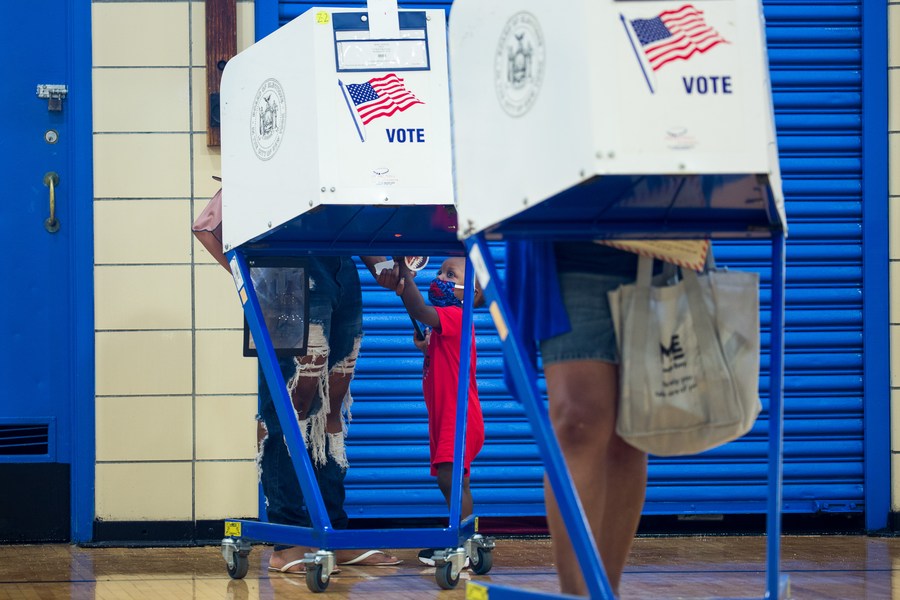 People vote at a polling site in Brooklyn borough of New York, the United States, June 23, 2020. (Photo by Michael Nagle/Xinhua)

Biden, who is considering a broad tier of candidates to be his running mate after pledging to pick a woman for the job, has said that he will announce his pick in early August.

Biden “holds a discernible — though not insurmountable — Electoral College advantage” over Trump, according to ABC News’ initial ratings for the 2020 general election which will be held on Nov. 3.

In his race against Hillary Clinton in 2016, Trump secured 306 electoral votes, winning the presidency — in part — by taking longtime Democratic strongholds: Pennsylvania, Wisconsin and Michigan.

In addition to the Trump-Biden race, all 435 seats in the U.S. House of Representatives and 35 of the 100 seats in the Senate will be contested on Nov. 3, along with 13 state and territorial governorships, as well as numerous other state and local elections.

In congressional races, Republicans will fight to defend their majority in the Senate, while Democrats are looking at expanding their seats in the House.

Ebooks have not been around for a very long time but millions of people use them and read them. There are many benefits to having ebooks over printed books and they have slowly captured the hearts of many. If you are someone who loves ebooks and has been looking for a great ebooks library online that hosts books from quality authors, then you need to check out what TOP has to offer.