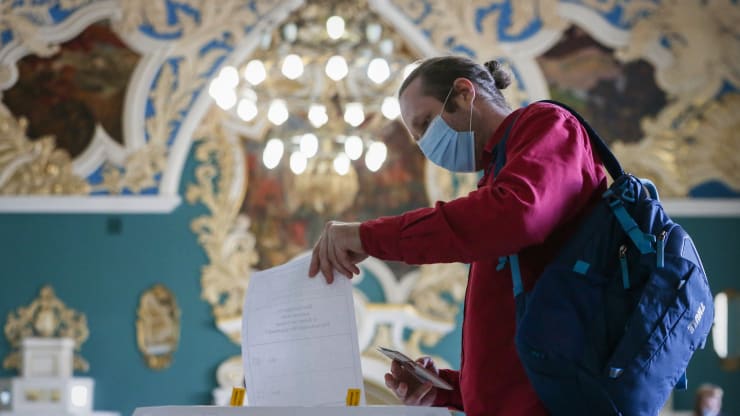 A week-long vote on constitutional changes in Russia comes to a close Wednesday, with citizens voting on changes which include an amendment that would allow President Vladimir Putin to run for further terms in office, and potentially lead the country until 2036.

Unlike most votes, however, the one in Russia is seen as a foregone conclusion.

The nationwide ballot has also been called a “poll” and “plebiscite” (like an advisory referendum) by experts because the constitutional changes have already been approved by Russia’s Parliament, and the public vote on them is seen as more of a national opinion poll, designed to lend legitimacy to the amendments.

Russia’s electoral commission said Tuesday that 45.7% of the total number of voters registered in the Russian Federation had already voted, as of Monday evening. Russian state pollster VCIOM published an exit poll on Tuesday showing a vast majority of Russians backed the proposed constitutional amendments.

Russians are being asked to vote “yes” or “no” to the changes, which are wide-ranging, covering a variety of issues, from family values to pensions and the minimum wage, and rules ensuring senior officials do not hold foreign passports.

On a geopolitical level, the changes to the constitution would “reset the clock” on Putin’s presidency and would enable him to run for office again in 2024, if he chooses, and again in 2030, potentially keeping him in power when he would be around 84 years old.

Russia has tried to make it easy for voters. Voting stations have been set up across the country both inside and out, with ballot boxes set up in parks, fields and on sidewalks, and some voters have been able to vote online too; Russian cosmonaut Anatoly Ivanishin became the first person to vote online from the International Space Station, Russia’s Space Agency Roscosmos said Tuesday.

There has been strong criticism of unusual voting practices, however, with prizes up for grabs for anyone that goes to vote, according to various Russian media reports.

A woman visits a polling station in the town of Zavolzhsk to vote in the 2020 Russian constitutional referendum.
Vladimir Smirnov

Having unveiled a monument to Soviet soldiers on Tuesday, Putin used the patriotic moment to encourage voters to make the most of the last day of voting on Wednesday.

“We are not just going to vote on amendments that have been clearly formulated as legal norms. We are going to vote for the country where we want to live, with cutting-edge education and health care, a reliable system of social protection and an effective government accountable to the people,” he said. “We are going to vote for a country to the benefit of which we have been working and which we would like to pass on to our children and grandchildren.”

He also said that “the updated text of the constitution and all of the proposed amendments will only come into force if you approve and support them.” But experts disagree, saying the changes are a done deal and that the pubic vote is a mere opinion poll designed to give the amendments a cloak of legitimacy.

Russia’s President Vladimir Putin addresses Russian citizens on June 30, the eve of the main day of voting on amendments to the Russian Constitution.
Mikhail Klimentyev

“While the poll is not required for the amendments to come into force, it aims to legitimize Putin’s likely plans to run for re-election after his term expires in 2024,” Teneo Intelligence said in a note earlier this week, with Andrius Tursa, Central & Eastern Europe advisor at the firm, noting Tuesday that  “there are few doubts that the result will be positive.”

Critics of the Kremlin have said the vote lacks transparency and scrutiny, and opposition leader Alexei Navalny has repeatedly called the legitimacy of the poll into question, commenting on Twitter about reported voting irregularities; Russia’s electoral commission said Tuesday that it had received only a small number of complaints about “possible violations.”

Teneo Intelligence’s Tursa noted that “key opposition figures have refrained from calling public protests so far,” against the vote, noting that, aside from the Covid-19-related risks of protesting, “one reason for this may be that the constitutional changes include some highly popular provisions on social benefits, pensions, and minimum wage, which are hard to criticize.”

A voter casts a ballot into a mobile ballot box during the nationwide constitutional referendum.
ALEXANDER NEMENOV

Still, Putin has seen his popularity ratings decline in recent months as ordinary Russians have suffered during the coronavirus crisis, and the president has been criticized for taking what has been seen as a hands-off approach to the pandemic. Russia has the third-largest number of cases in the world, with almost 647,000 reported infections, to date, and 9,306 deaths, according to data compiled by Johns Hopkins University.

Teneo’s Tursa said public discontent with the worsening economic situation is expected to continue rising as the unemployment rate climbs. “According to Prime Minister Mikhail Mishustin, the number of officially registered unemployed persons rose by 3.5 times since 1 April,” Tursa noted.

If you are looking to find the right social media marketing opportunity, then becoming a user with TOP platform would be the best step first to get started with. They partner with some of the best and most influential people who are social media influencers today.