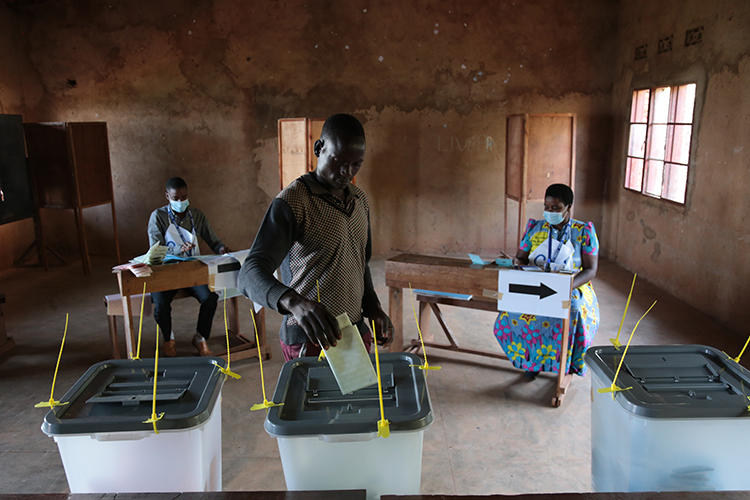 A Burundian man casts his ballot during the presidential and general elections at the Bubu Primary school in Giheta, central Burundi, on May 20, 2020. (Photo by - / AFP)

Posted By: Editorial Teamon: May 21, 2020In: ElectionsNo Comments
Print Email

A Burundian man casts his ballot during the presidential and general elections at the Bubu Primary school in Giheta, central Burundi, on May 20, 2020. (Photo by – / AFP)

Nairobi, May 20, 2020 — In response to Burundian authorities’ blocking of social media networks during today’s presidential elections, the Committee to Protect Journalists issued the following statement:

“Cutting off access to social media platforms will severely undermine journalists’ ability to cover this election, and violates citizens’ rights to the timely information they need to make decisions and to monitor electoral developments,” said CPJ sub-Saharan Africa Representative Muthoki Mumo. “Authorities in Burundi should immediately end all internet disruptions and maintain access in the post-election period.”

Users sporadically could not access WhatsApp and websites including Facebook, YouTube, and Twitter in Burundi today, according to media reports and a statement from the digital rights organization Access Now. Elections are being held in the country today to choose a successor to President Pierre Nkurunziza, who is stepping down after 15 years in power, according to reports. Some users have been able to circumvent the blocks through the use of virtual private network (VPN) software, according to Access Now.

In a May 18 letter, CPJ and 30 other rights organizations called on President Nkurunziza to maintain internet access during and after the elections. The letter noted that at least three news independent news sites are blocked in the country.

Search Engine Optimization “SEO” is the science of enhancing a website’s ranking in search engines, thus boosting traffic to that website – Visit The Online Publishers TOP online marketing to reach out to SEO experts.