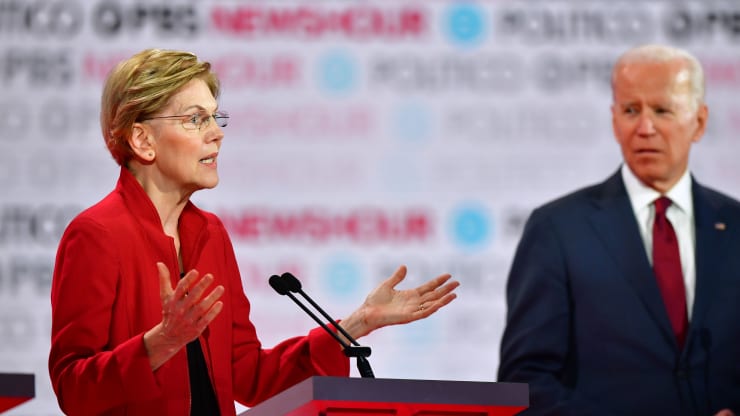 Democratic presidential contender Elizabeth Warren unveiled a proposal on Tuesday to overhaul the nation’s personal bankruptcy laws, a direct challenge to rival Joe Biden over landmark legislation from more than a decade ago that she opposed and he supported.

“I’m announcing my plan to repeal the harmful provisions in the 2005 bankruptcy bill and overhaul consumer bankruptcy rules in this country to give Americans a better chance of getting back on their feet,” Warren wrote in the plan, which the campaign posted on the blogging platform Medium. The plan does not mention former Vice President Biden by name.

Warren was one of the nation’s leading scholars of bankruptcy law, teaching at Harvard Law School and other universities, before she won her seat in the Senate. The Massachusetts progressive vigorously opposed the 2005 bankruptcy bill while it was under consideration in Congress, while then-Sen. Biden helped to shepherd its passage.

The fight over the law was one of the precipitating factors behind Warren’s transition from academia into public office and is one of the central policy differences animating the clash between her and Biden, who is more moderate on most issues.

The day after Biden entered the race in April, Warren accused him of having been on the “side of the credit card companies.”

“Our disagreement is a matter of public record,” she said at the time.

In her plan, Warren said she “lost that fight in 2005” but “didn’t stop fighting to hold the financial industry accountable,” noting her role in creating the Consumer Financial Protection Bureau, the federal regulator established in the wake of the 2008 financial crisis.

The CFPB has returned nearly $12 billion to consumers since it was created, according to government figures.

She wrote in her plan that the 2005 bill made that crisis “significantly worse.”

While bankruptcy has not been one of the top issues that Democrats have seized on in the primary, it is a topic central to Warren’s political identity.

“I spent most of my career studying one simple question: why do American families go broke?” she wrote.

Warren is in third place in the Democratic presidential race, according to national surveys, behind front-runner Biden and Sen. Bernie Sanders, I-Vt. Warren has fallen in the polls since early October, when she at times was polling narrowly ahead of Biden.

Biden did not respond to a request for comment. But in May, the campaign responded to a similar critique by saying in a statement that in 2005 it was “a certainty that the Republican-controlled Congress and White House would turn the bankruptcy bill into law.”

Biden “fought for and won important concessions for middle class families in it, including protecting access to Chapter 7 forgiveness for working people, making child support and alimony the number one priority for debt payments — in front of big banks and credit card companies — and forcing credit card companies to warn borrowers about their interest rates,” the campaign said at the time.

Warren said her bankruptcy plan will make it easier for those who are in debt to obtain relief through bankruptcy, including by ending “the absurd rules that make it nearly impossible to discharge student loan debt.”

She said the plan will address racial and gender disparities in the personal bankruptcy system and make it easier for people to take care of themselves and their children during the bankruptcy process.

“Thanks in part to the 2005 bankruptcy bill, our current system makes it far too hard for people in need to start the bankruptcy process so they can get back on their feet,” Warren wrote. “My plan streamlines the process, reduces costs, and gives people more flexibility in bankruptcy to find solutions that match their financial problems.”

The plan would do away with filing fees for those who are below the federal poverty line and allow Chapter 7 filers to pay attorneys’ fees during or after bankruptcy, rather than just up front. Warren said the plan would also reduce the cost of hiring a consumer bankruptcy attorney by doing away with rules imposed on those lawyers by the 2005 legislation.

That legislation requires personal bankruptcy lawyers to certify the accuracy of financial disclosures and provide financial advice, among other obligations, Warren said.

Under Chapter 7, a bankrupt individual’s assets, such as their homes, are sold by a trustee, while Chapter 13 allows for them to stop foreclosure proceedings. But Warren wrote in the plan that many opt for Chapter 13 because it’s “the only way they can afford to pay their bankruptcy lawyer.”

“Forcing people into Chapter 13 because they cannot afford to pay their lawyer up front is a ridiculous way to run a consumer debt relief system,” Warren wrote.

Warren said that in contrast, her plan “offers a single system available to all consumers.”

“When people file for bankruptcy, they would disclose all of their debts, assets, and income, just as they do now,” Warren wrote. “And just as under the current system, creditors must stop all collection actions against the debtor outside of bankruptcy court.”

Rather than opting for Chapter 7 or Chapter 13 bankruptcy, though, Warren wrote that filers would “choose from a menu of options for addressing their debts.”

“The menu of options available would include a Chapter 7-type option of surrendering all non-exempt property in exchange for having their unpaid debts ‘discharged,’ as well as options that allow people to deal with specific financial problems without involving all of their obligations,” she wrote.

Warren said her proposals will make the bankruptcy process “cheaper and quicker.”

“And speed is important. Research has shown that the ‘sweatbox’ period when consumers wrestle with the decision to file for bankruptcy is particularly damaging to families and their financial health,” Warren said. “The 2005 law benefited credit card companies by extending the sweatbox period.”

Warren also pledged to close what she characterized as “loopholes” in federal bankruptcy law, such as the “Millionaire’s Loophole,” which exempts certain trusts from bankruptcy claims.

Her plan would also block individuals from using bankruptcy as a shield against civil rights claims, such as debts arising from police brutality, while eliminating some of the protections for local government fines, which disproportionately affect black and low-income communities.

Freelancers have the chance to write Ebooks to read, which will be sold in the TOP platform ebooks library.