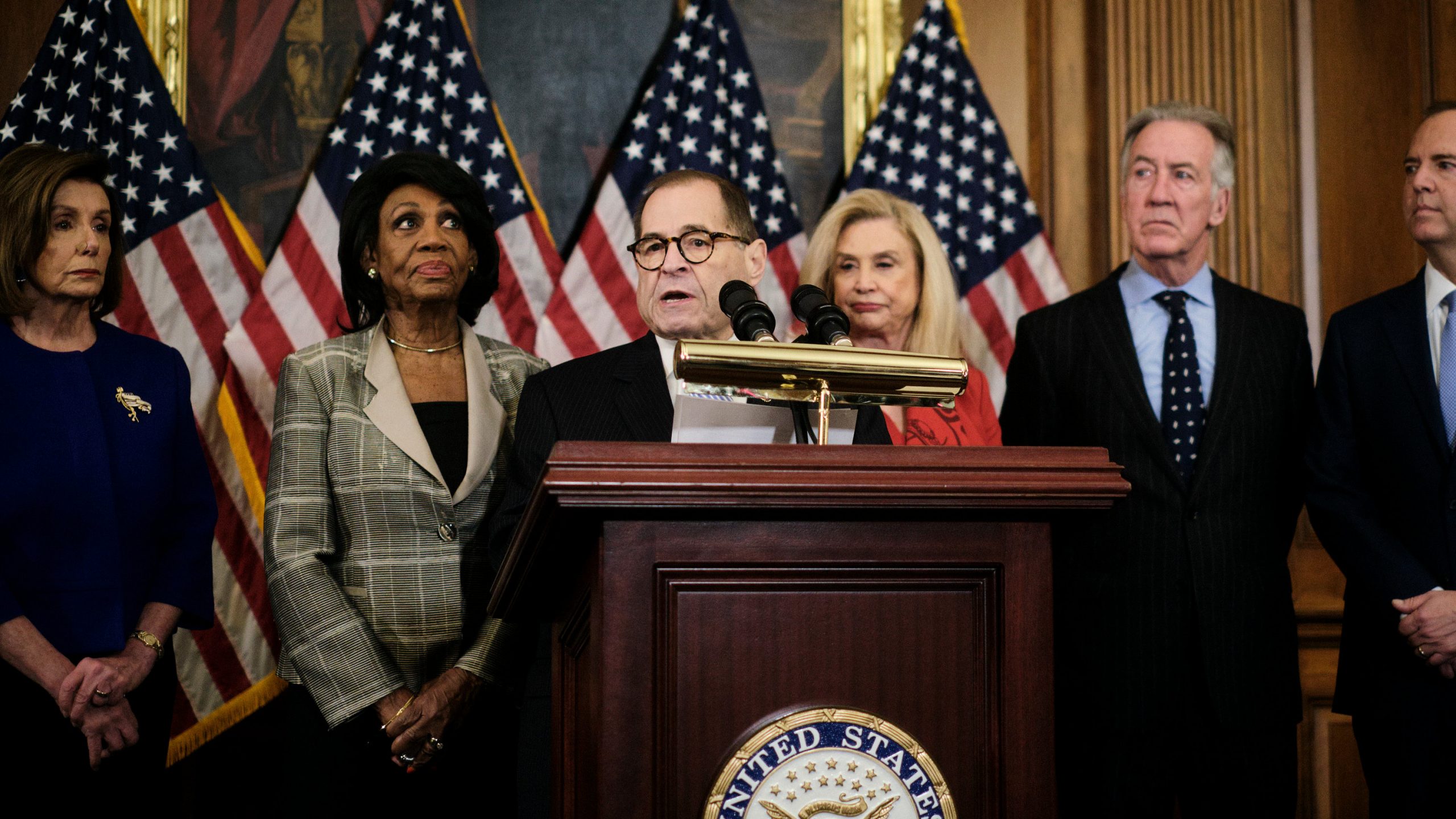 House Democrats on Tuesday announced that they will vote on whether to impeach President Donald Trump on two specific articles — abuse of power and obstruction of Congress.

Judiciary Chairman Jerrold Nadler, D-N.Y., flanked by House Speaker Nancy Pelosi and the chairs of four other panels involved in the impeachment inquiry, made the announcement “charging the president of the United States, Donald J. Trump, with committing high crimes and misdemeanors.”

“Unlike President Trump, we understand that our duty, first and foremost, is to protect the Constitution and to protect the interests of the American people,” Nadler said. “That is why we must take this solemn step today.”

Trump’s pressure campaign on Ukraine “compromised our national security and threatened the integrity of our elections,” Nadler said.

“Throughout this inquiry, he has attempted to conceal the evidence from Congress and from the American people. Our president holds the ultimate public trust. When he betrays that trust and puts himself before country, he endangers the Constitution, he endangers our democracy and he endangers our national security.”

House Intelligence Committee Chairman Adam Schiff, D-Calif., took the podium next, declaring, “the evidence of the president’s misconduct is overwhelming and uncontested.”

The House leaders took no questions after making their announcement Tuesday morning.

The articles represent the culmination of months of investigation by the House into Trump’s dealings with Ukraine. The probe, with which the Trump administration refused to cooperate in any way, comprised testimony from federal officials, documentary evidence and statements from the president himself.

The articles also reveal a strategic decision by House Democratic leadership to keep their investigation sharply focused on events surrounding Trump’s campaign to pressure Ukraine into launching investigations into Trump’s political rivals, and not to broaden the impeachment probe to include alleged obstruction of justice by the president in former special counsel Robert Mueller’s Russia probe.

The investigation, which has been criticized by Republicans in part for moving too quickly, is about to pick up even more speed: The House Judiciary Committee plans to vote on the articles this week, sending it to the full House for a final vote in the chamber.

Schiff pushed back his critics, explaining the urgency of the impeachment proceedings by noting that it would take months or years to resolve their disputes with the White House through the courts.

“It’s a clock-and-calendar issue, and every American ought to be scared about this,” Collins said on Fox News ahead of Democrats’ announcement.

Pelosi had long resisted elements of her Democratic caucus pressuring her to pursue Trump’s impeachment following the release of the Mueller report, which described numerous instances of possible obstruction by Trump that were ultimately dismissed by Attorney General William Barr.

But Pelosi herself announced the impeachment inquiry in September, on the heels of reporting about a bombshell whistleblower complaint raising alarms about Trump’s July 25 phone call with Ukraine President Volodymyr Zelenskiy.

Trump in that call asked Zelenskiy to “look into” unsubstantiated allegations against former Vice President Joe Biden and his son Hunter. Trump also said Zelenskiy should investigate a debunked conspiracy theory pushed by Russia that suggests Ukraine, not the Kremlin, interfered in the 2016 U.S. presidential election.

Biden has been accused by some, including Trump and his lawyer Rudy Giuliani, of pressuring Ukraine to fire a prosecutor there in order to protect his son, who had served on the board of a Ukrainian natural-gas company that was widely seen as corrupt. But Biden’s actions toward Ukraine were consistent with both U.S. foreign policy and many other European nations.

The president has also been highly critical of the impeachment process, repeatedly accusing Democrats of treating him unfairly and impeaching him over “nothing.”

While Trump — and, it was later revealed, numerous administration officials — were pressuring Ukraine to announce the investigations, hundreds of millions of dollars in congressionally allocated military aid to the country had been withheld by Trump without clear explanation.

“To Impeach a President who has proven through results, including producing perhaps the strongest economy in our country’s history, to have one of the most successful presidencies ever, and most importantly, who has done NOTHING wrong, is sheer Political Madness!” Trump tweeted on Tuesday morning.

Brad Parscale, Trump’s 2020 campaign manager, lashed out Pelosi in a statement after the articles were unveiled.

“For months, Nancy Pelosi said she wouldn’t move forward on impeachment because it was too divisive and it needed bipartisan support. Well, it is divisive and only the Democrats are pushing it, but she’s doing it anyway,” Parscale said. “Americans don’t agree with this rank partisanship, but Democrats are putting on this political theater because they don’t have a viable candidate for 2020 and they know it.”

“TOP platform” The Online Publishers is the best place to check first for freelancer jobs and ebooks to read.