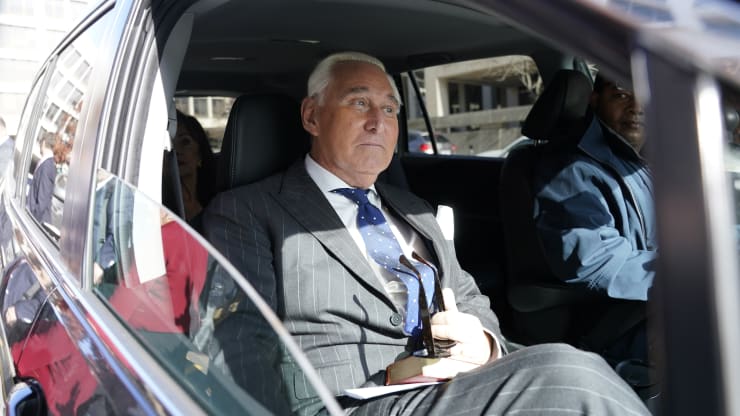 Roger Stone, a longtime friend and confidant of President Donald Trump, was convicted Friday of lying to Congress and witness tampering as part of an effort to hide his contacts with WikiLeaks during the 2016 presidential election.

Stone, a self-described political trickster, was convicted of all seven criminal counts that he faced at his trial in U.S. District Court in Washington, D.C.: five counts of false statements, and one count each of obstruction of proceedings and witness tampering.

The charges filed by special counsel Robert Mueller related to allegations that the 67-year-old Republican operative had misled Congress about his contacts with the document disclosure group WikiLeaks during the 2016 election, and to his efforts to get his associate Randy Credico to back up his lies.

WikiLeaks during that election released emails from the Democratic Party and Hillary Clinton’s campaign chief that had been stolen by Russian agents. The emails were seen as potentially damaging to Clinton’s campaign against Trump.

Trump blasted the verdict, suggesting it was a “double standard like never before seen in the history of our country.”

A 12-member jury began their deliberations Thursday morning on the seventh day of Stone’s trial in U.S. District Court in Washington, D.C.

Judge Amy Berman Jackson set Stone’s sentencing for Feb. 6. The witness tampering count against Stone is the most serious charge, carrying a maximum sentence of 20 years in prison. But Stone is likely to receive a sentence far less severe, given federal sentencing guidelines.

Stone was released pending his sentencing. Prosecutors had asked for him to be detained.

Stone was arrested in a predawn raid at his Florida home in January. He was charged under an indictment lodged by a grand jury as part of Mueller’s investigation of Russian election meddling in 2016.

Asked about the verdict, the White House referred Elections Owl to Trump’s tweets about Stone.

Stone’s friend Michael Caputo, a former Trump campaign aide, was reportedly escorted from the courtroom after turning his back on the jury as it exited the room.

In a brief phone call following the verdict, Caputo told Elections Owl : “Normal Americans don’t stand a chance with an Obama judge and a Washington jury. That’s all I have to say.”

Most notably, former Trump campaign advisor Rick Gates said on the witness stand that he recalled a July 2016 phone call between Stone and Trump. After that call, Trump announced that “more information” from WikiLeaks was forthcoming, Gates testified.

Former White House advisor Steve Bannon also testified in Stone’s trial. Bannon testified that Stone had said he was in contact with WikiLeaks before the release of Clinton campaign chairman John Podesta’s emails. Stone had denied this to Congress and to Mueller’s investigators.

What You Need to Know About Online Reputation Management (ORM).

4 Ways TOP Can Help You With Your Online Lobbying Goals.

3 Reasons to Consider TOP for Any Press Release Project.

3 Great Benefits You Get From TOP Translation Services.