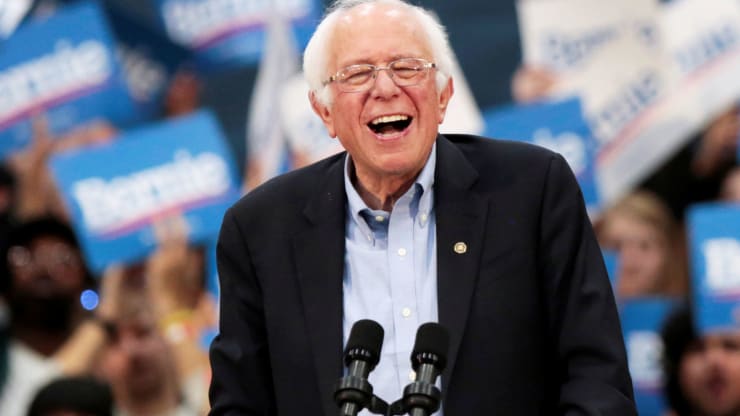 Apple announced Monday with California governor Gavin Newsom that it will donate $2.5 billion toward building affordable housing in California.

In a statement on Monday, Sanders said Apple is not fixing the affordable housing problem — it’s becoming a real estate lender. He criticized Apple for not paying what he considers to be its fair share of taxes, which Sanders says has contributed to the unaffordable housing market in California.

“Apple’s announcement that it is entering the real estate lending business is an effort to distract from the fact that it has helped create California’s housing crisis – all while raking in $800 million of taxpayer subsidies, and keeping a quarter trillion dollars of profit offshore, in order to avoid paying billions of dollars in taxes,” Sanders said in a statement.

In its announcement, Apple committed to including $1 billion towards an affordable housing investment fund and a state-run $1 billion mortgage assistance fund for first-time homebuyers. It also created a $150 million fund that will distribute long-term “forgivable loans” and grants to affordable housing projects along side $50 million in donations to charities focusing on homelessness. Apple also said that it will make “available” $300 million in land it owns in San Jose to build affordable housing.

According to Sanders’ press release: “Apple is the latest tech industry tax evader that has portrayed its entry into the housing business as an act of philanthropic altruism.”

Both Sanders and Apple agree California is facing a housing crisis. Housing prices are among the highest in the nation, forcing teachers and other people who have jobs without huge tech salaries to move out of the area or scrape by while paying a substantial amount on rent or housing.

Apple points out in its announcement that 30,000 people left San Francisco in three months earlier this year. Sanders quoted a stat that 134,000 California residents are homeless.

But Sanders ties the problem to the country’s tax policy, calling to boost tax revenues on companies like Apple so that government can make long-term investments for additional housing, instead of the public-private grant programs that Apple is backing alongside California’s Democratic governor.

Sanders has also proposed a “Housing for All” plan that would be partially funded by taxes on people with household net worth over $32 million.

“When we defeat Donald Trump, we are going to make companies like Apple start paying their fair share, so that we can finally start making massive long-term investments that guarantee Americans affordable housing,” Sanders said in a statement.

Sanders is likely referring to Apple’s practice of keeping overseas earnings outside the United States to avoid tax liabilities. Apple did not respond to a request for comment, but Apple CEO Tim Cook has previously said that “we pay all the taxes we owe.”

Finding Someone To Handle Press Release.

3 Reasons To Get TOP For Press Release Distribution Help.

Where To Go To Buy From An Online Photos Gallery.

TOP Gives Writers A Way To Earn More By Selling In The Ebooks Library.

3 Ways To Get Ahead Of Reputation Repair With TOP.

No Better Option For Online Reviews Than TOP.

2 Ways TOP Helps You Earn For Reviews You Write.