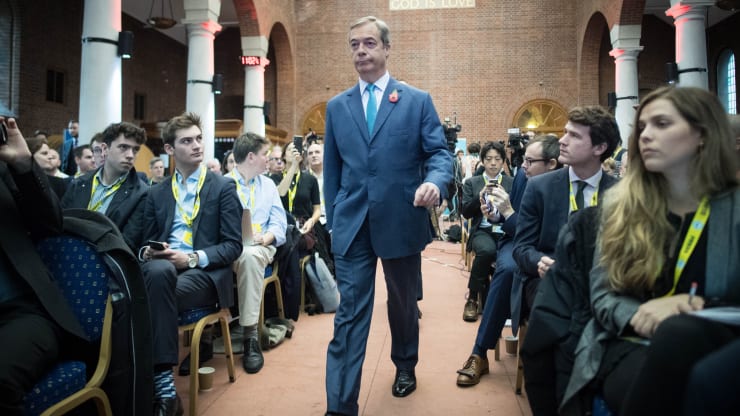 The leader of the U.K. Brexit Party and Donald Trump-ally Nigel Farage kicked off his election campaign on Friday with both an offer and a warning to U.K. Prime Minister Boris Johnson.

The starting gun has been fired on campaigning toward a U.K. general election on December 12 in a bid by different parties to both seize power and resolve the U.K.’s departure from the European Union.

Speaking at the Brexit Party launch in Westminster, London, Farage said he would sign up around 500 candidates to stand for seats in England, Wales, and Scotland.

The Brexit Party has no current MPs (Members of Parliament) but feels it can do especially well in the leave-supporting areas of Wales and northeast England. Farage said his party could take seats from Johnson’s main opposition Labour party.

“It would be fair to say that there are around 150 seats in this country that are Labour-run constituencies that the Conservative Party have never won in their history. And they are not going to at this election,” Farage said.

Farage called on the U.K. prime minister to join a “leave alliance” and said his plan would work if Johnson’s Conservative Party backed away from contesting the pro-Brexit vote.

“That is how I feel a deal of this kind, a non-aggression pact, could work,” said Farage.

Johnson recently managed to negotiate a Brexit withdrawal deal with the EU and passed a related bill through the first stage of Parliament.

Farage said Friday he would not enter any sort of alliance with Johnson’s Conservative Party, unless that deal was ditched. The Brexit Party leader then offered a compromise plan.

Farage said up until now he had called for a “clean break” or “no-deal” Brexit but if an alliance with Johnson could be found then the two parties should work towards a free trade agreement with the European Union, like the one currently enjoyed by Canada.

The renowned Brexit proponent is friendly with President Donald Trump and gained something of a media coup on Thursday evening when he managed to interview the U.S. leader on his regular radio show.

During the phone-in, Trump hinted heavily that Johnson’s deal, which at first glance looks likely to retain many of the EU’s standards and practices, would not make it easy for the United States to do a trade deal with Britain.

On Friday, Farage said this was further evidence that Johnson’s deal was not Brexit and it was time to “drop the deal.”

What will Johnson do?

What will Johnson do?

The Conservative Party appeared to distance itself from any union with the Brexit Party quickly, telling Reuters Friday that: “A vote for Farage risks letting Jeremy Corbyn (Labour party leader) into Downing Street via the back door.”

Current polling suggests that the Conservative Party may feel it doesn’t need any alliance to win a majority in Parliament.

One Panelbase poll of election intentions, which asked respondents over Wednesday and Thursday, put the Conservative Party on 40% of the vote with the main opposition Labour on 29%. The Brexit Party gathered 9% of the vote.

When asked if he felt that Downing Street would view the polls as evidence that those who want to leave the EU will swing back to the Conservative Party, rather than the Brexit Party, Farage was dismissive.

“If they think that suddenly after years of letting people down and breaking virtually every manifesto promise they have made, at election after election, that suddenly all the ‘Leave’ voters of the country will stand up and say ‘we are all going to back Boris Johnson’ they don’t understand the make-up of ‘Leave’ voters in this country,” he said.

Farage added that the desire to leave the EU crossed traditional party loyalties.

“That is why the only way to get Brexit done is to form a Leave Alliance and win this election with a big stonking majority.”

Leon Cooperman rips Elizabeth Warren in new letter for ‘soak-the-rich positions,’ and treating him like ‘an ungrateful child’

Getting The Best In Online Marketing With The Trend It Service.

Tips to help you choose the best digital marketing agency to boost your tourism sector.

The Role Of Social Media In Online Lobbying.

Where You Can Get Paid As A Social Media Influencer Online.

Earning From Your Social Media By Becoming A TOP Trender.

Get Expert Help With Press Release Services Through TOP.

Where To Find Original Online Photos Gallery For Sale.

4 Benefits To Joining with TOP For Online Reputation Management Service.