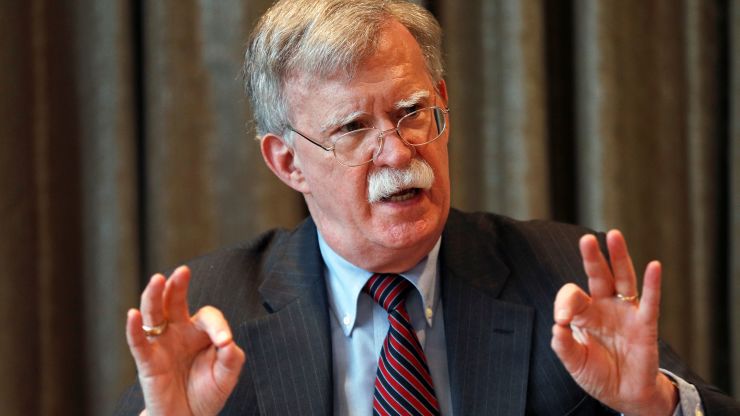 Lawyers for former national security advisor John Bolton have been in touch with officials working on House committees about possibly testifying in the impeachment probe of President Donald Trump, a person close to Bolton told NBC News on Friday.

The news comes more than a week after the White House’s former top Europe expert, Fiona Hill, reportedly testified to Congress that Bolton was so disturbed by efforts to get Ukraine to investigate Trump’s political opponents that he called it a “drug deal.”

Hill said that Bolton told her he did not want to be part of that push, which involved White House chief of staff Mick Mulvaney, according to reports of her testimony.

Giuliani has been at the head of a charge to have Ukraine launch investigations that could benefit Trump politically ahead of his 2020 reelection effort.

The Washington Post reported Thursday that White House trade representative Robert Lighthizer in August withdrew a recommendation to restore some of Ukraine’s trade privileges after Bolton “warned him that President Trump probably would oppose any action that benefited the government in Kyiv.”

Trump said he fired Bolton, while Bolton said he had resigned.

The impeachment probe is focused on pressure by Trump and his emissaries on Ukraine to investigate former Vice President Joe Biden and his son Hunter Biden. Joe Biden is currently seeking the 2020 Democratic presidential nomination.

Trump also wants Ukraine to investigate a conspiracy theory that says elements in that country helped cover up evidence related to hacking of a Democratic National Committee computer server in the runup to the 2016 U.S. presidential election and played a role in news stories that led to the resignation and eventual prosecution of Trump’s then-campaign chairman Paul Manafort in 2016.

The conspiracy theory says Russia was framed for hacking the DNC server and for the subsequent release of internal emails related to the DNC and the party’s eventual presidential nominee that year, Hillary Clinton.

Special counsel Robert Mueller’s investigation found that Russian agents hacked the server and were behind the effort to release information about Clinton and the DNC that would support Trump’s candidacy.

Trump has rejected claims that Russia was responsible in some way for his election.

At the time that Trump had a phone call in July with Ukraine President Volodymyr Zelensky and asked for “a favor” in doing those investigations, the White House was withholding nearly $400 million in congressionally appropriated military aid from Ukraine.

Giuliani and others in Trump’s orbit argue that Joe Biden, while vice president during the Obama administration, had pressured Ukraine’s government to fire a prosecutor there in order to thwart a purported investigation of a natural gas company that had Hunter Biden on its board.

However both Bidens have said they did nothing wrong. At the time Joe Biden asked Ukraine to get rid of the prosecutor, he was echoing similar calls from European countries who complained that the prosecutor was not doing enough to combat corruption there.

Search Engine Optimization “SEO” is the science of enhancing a website’s ranking in search engines, thus boosting traffic to that website – Visit The Online Publishers TOP online marketing to reach out to SEO experts.

A Way To Promote Foreign Direct Investments Thanks To TOP Platform.

3 Reasons You Find The Best Freelance Jobs With TOP Platform.

Want To Start Selling Your Photos Online? Here Are the Steps to Follow.

The Best Place For Online Ebooks.

3 Reasons To Check Out the TOP Photo Gallery.

3 Reasons To Think About TOP For Online Reputation Building.

2 Reasons All Online Reviewers Need To Be With TOP.

3 Ways To Get Success With Freelance Jobs On TOP.

How TOP Helps When You Need To Know How To Repair A Bad Reputation.