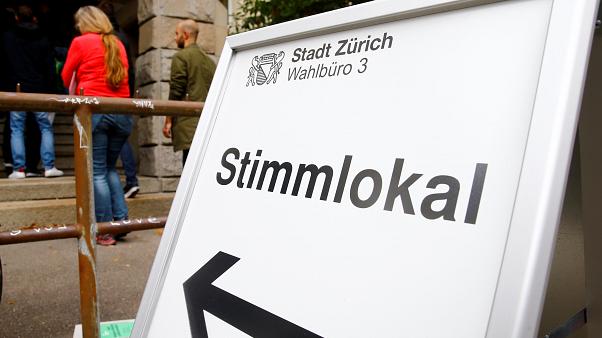 Environmentalists could potentially win a seat in the coalition that has governed Swiss politics for decades.

As climate change and the country’s relationship with the European Union were the main focuses of the political campaign, the Greens rode on voters’ climate concerns in the parliamentary election.

Their gains could dilute the centre-right parties’ grip on power.

Changing just one member of the seven-seat cabinet would be a political sensation: the Greens have never had a seat in the four-party Federal Council.

According to final results, the Greens (left) are now the fourth party in the National Council (lower house) ahead of the Christian Democratic Party, and trailing the right-wing Liberal-Radical Party by just one seat.

The Greens gained a total of 28 seats (13.2% of the votes), compared to just 11 seats in the previous legislature.

SVP, which has stirred controversy with its anti-immigration campaign, lost 12 seats. It got 25.6% of the votes, compared to 29.4% in 2015. Yet with 54 seats, it remains the country’s dominant political force.

Cabinet seats have been divvied up among the SVP, SP, FDP and CVP in nearly the same way since 1959. The three biggest parties get two seats and the fourth-biggest gets one under the informal “magic formula” system.

Green Party leader Regula Rytz compared the vote to a “tectonic change” and said: “We may have to discuss a new magic formula.”

In December, the two parliamentary chambers will elect the government, but in the past it has taken more than one national election cycle for that selection procedure to change the cabinet lineup to more closely reflect the results.

Analysts caution against expecting too radical a shift after a campaign that was light on typical hot-button issues such as migration and Swiss ties with the European Union that have given the anti-EU SVP a boost in the past.

Get Started With Earning For Posting On Social Media. To more click >>> Theinternationalcampaigner

3 Reasons to Consider TOP for Any Press Release Project.

How to come up with a successful ad?!.

3 Steps to Joining With TOP To Get Great Online Reviews.

One Step To Getting Great Online Reviews.

4 Reasons to Go With TOP When Searching For Translation Service Help.