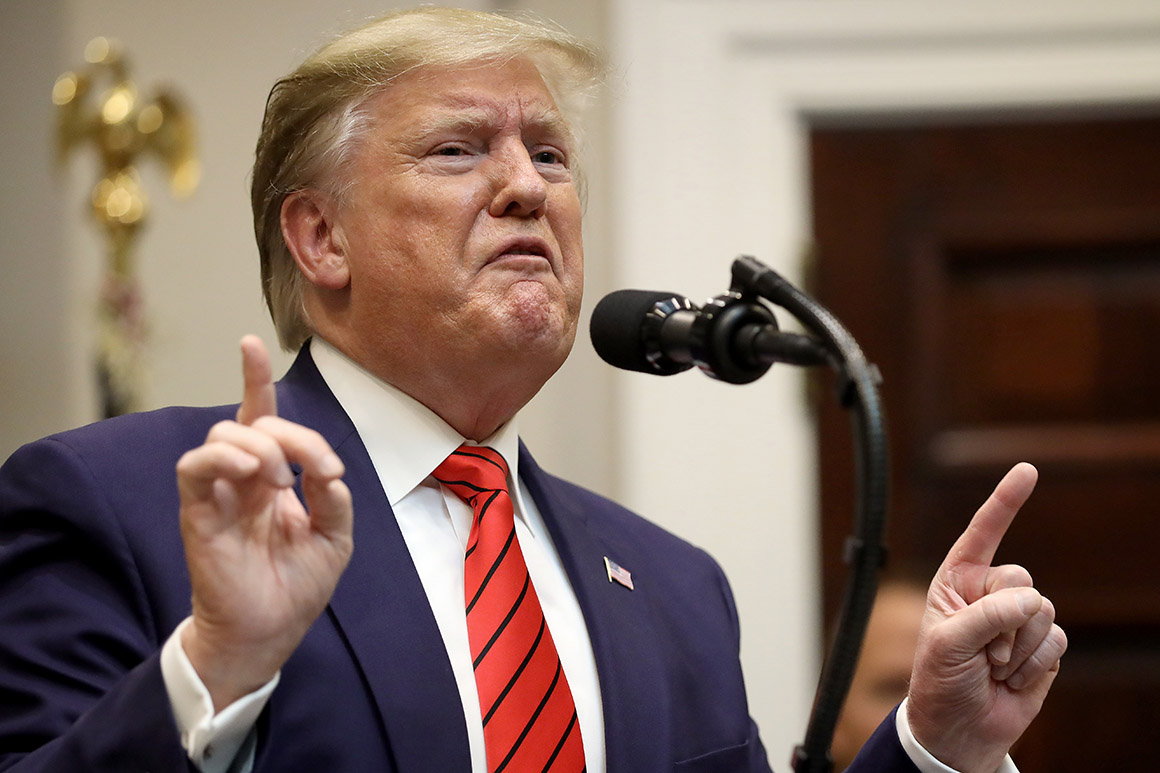 WASHINGTON, DC - OCTOBER 09: U.S. President Donald Trump responds to a question from a reporter at an event for the signing of two executive orders aimed at greater governmental transparency at the White House October 9, 2019 in Washington, DC. Trump answered questions on the pending impeachment inquiry and the Turkish offensive into northern Syria following the signing of the executive orders. (Photo by Win McNamee/Getty Images)

President Donald Trump blasted the conservative cable network Fox News on Thursday after it reported that its new poll on impeachment found a majority of respondents favoring his removal from office.

“Whoever their Pollster is, they suck,” Trump lashed out on Twitter, a day after the Fox poll showed that a new high of 51% of voters want Trump both impeached and removed from office and 40% opposed impeachment.

A Fox poll in July found that 42% favored Trump’s impeachment and removal, while 45% opposed impeachment.

Fox News’s latest poll shows a stronger level of support for Trump’s removal than two other recent polls, each of which found support for impeachment at below 50% of respondents.

Trump claimed that ever since he announced his candidacy for president “I have NEVER had a good @FoxNews Poll.” He also said the network “is also much different than it used to be in the good old days.”

It was unclear whether the president was referring to himself with “US,” or to the United States.

Shortly after those tweets, Trump posted another tweet that praised One America News Network — a competing conservative cable network — for its “fair coverage and brilliant reporting.”

Despite Trump’s ire over the latest Fox News poll, he has happily tweeted results of prior polls sponsored by the network when they have shown results he likes.

CNBC has reached out for comment to Fox News and to Beacon Research and Daron Shaw of Shaw & Company Research, the companies which jointly conducted the most recent Fox News poll.

The poll was based on interviews of about 1,000 voters over landline and cellphones. It had a margin of error of 3 percentage points.

Though Fox News’ programming is often criticized for having a conservative bias, its scientific polling is generally seen as credible. It is overseen jointly by Democratic and Republican pollsters.

The House of Representatives is currently conducting an impeachment inquiry that was sparked by revelations that Trump had withheld congressionally approved military aid to Ukraine while he pressured that country’s president to investigate former Vice President Joe Biden, a leading contender for the Democratic presidential nomination, and Biden’s son Hunter.

A Quinnipiac University poll on Tuesday found that 45% of registered voters said Trump should be impeached, with 49% opposing that idea. The split in the same poll, was 47-47 the prior week, but was 37% for impeachment, and 57% against in July.

Also Tuesday, an NBC News/Wall Street Journal poll found that 43% of Americans believe that Trump should be impeached and removed from office, compared with 49% who opposed impeachment.

Trump routinely receives glowing coverage from a number of Fox News shows, including “Fox and Friends,” and from the evening shows hosted by the conservatives Sean Hannity, Tucker Carlson and Laura Ingraham.

Trump and his surrogates often appear on Fox shows. On Wednesday night, Hannity had Trump’s personal lawyer Rudy Giuliani on as a guest, followed by the president’s son Eric.

But Trump has been displeased at times with coverage of him by the Fox News shows that specialize in news rather than opinion. In particular, he has singled out anchor Shepard Smith for criticism, as well as Andrew Napolitano, a former New Jersey judge who is a legal analyst for the network.

Napolitano reportedly told friends in 2017 that Trump had told him that he was “on the list” of candidates for a seat on the U.S. Supreme Court that had become vacant the prior year as a result of the death of Antonin Scalia.

Trump later appointed Neil Gorsuch to that seat. The president tapped Brett Kavanaugh for a seat that became vacant in 2018 due to the resignation of Justice Anthony Kennedy.

Donna Brazile, whom Trump pointedly took a shot at in his tweet Thursday, is a former head of the Democratic National Committee and a Fox News contributor.

Trump’s tweet was referring to Brazile’s former contributor role at CNN, which came to an ignominious end after it was revealed, in a dump of emails obtained by WikiLeaks, that she had shared questions for 2016 presidential candidates at CNN-sponsored events with Hillary Clinton’s campaign.

5 Reasons TOP Is The Best Digital Marketing Agency To Sign Up With.

WASHINGTON, DC – OCTOBER 09: U.S. President Donald Trump responds to a question from a reporter at an event for the signing of two executive orders aimed at greater governmental transparency at the White House October 9, 2019 in Washington, DC. Trump answered questions on the pending impeachment inquiry and the Turkish offensive into northern Syria following the signing of the executive orders. (Photo by Win McNamee/Getty Images)