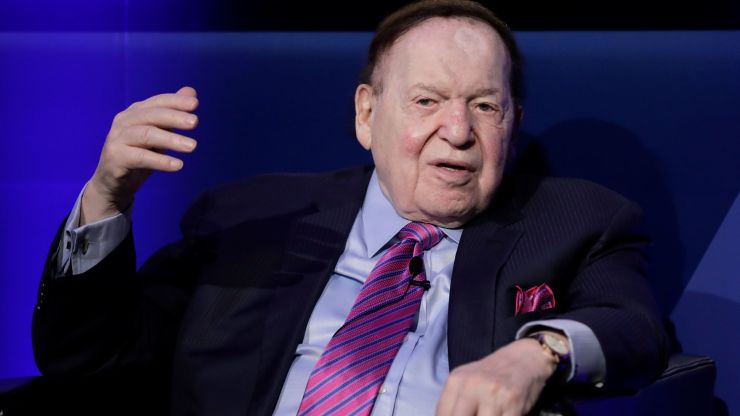 Republican megadonor and Las Vegas Sands CEO Sheldon Adelson and his wife, Miriam, gave the Senate’s GOP fundraising arm over $200,000 last month as the party works to protect its majority in the chamber during next year’s elections.

Their massive donations came in July, with each writing checks worth $106,500 to the National Republican Senatorial Committee, according to a new Federal Election Commission disclosure filed Tuesday.

The early contribution may reflect that the GOP donor class are concerned about the upcoming 2020 elections, with political analysts already labeling at least three seats as toss-ups. The GOP will defend 22 Senate seats next year. The party has a 53-47 edge in the Senate.

The NRSC finished July raising $4.3 million and has $11.7 million on hand.

Republican strategists, however, tried to brush off the donation as only a sign of the Adelsons being consistent, big-dollar supporters.

“Very consistent supporters,” Josh Holmes, a former chief of staff to Senate Majority Leader Mitch McConnell, told CNBC. “I think it reflects their continued support of Senate Republicans. Not sure I can make any more of it than that.”

The Adelsons had been relatively quiet so far in the current election cycle. They’ve given directly to a variety of candidates, but this six figure donation would mark their highest contribution so far.

The two combined to give over $120 million to Republican causes throughout the 2018 congressional midterm cycle.

Representatives for the Adelsons and the NRSC did not return a request for comment.

The Adelson’s aren’t the only ones who are flooding the committee with cash.

Billionaire investor Sam Zell donated $64,500 to the NRSC at the end of July. Pfizer’s political action committee wrote a $5,000 check.

Meanwhile, the groups rivals, the Democratic Senatorial Campaign Committee, have yet to release their totals from last month. In June, they brought in just over $5 million and had $14 million on hand. The Cook Political Report only marks Alabama Sen. Doug Jones’ seat as a toss-up. The other 11 listed are labeled either solid or likely Democrat.

“The first thing you need to decide when you build your blog is what you want to accomplish with it, and what it can do if successful.” – Ron Dawson – Subscribe with THE ONLINE PUBLISHERS TOP online bloggers to offer your services as a blogger.

Finding Someone To Handle Press Release.

TOP Can Handle Press Release Services For You.

The Best Option For Getting Quality Positive Reviews For Your Business.

Looking for New Ebooks To Read With TOP.

5 Reasons To Get Online Reviews Done With TOP.

2 Ways To Get More Results With Your Ads.

Why Go With TOP For Any Translation Services.

3 Reasons To Go With TOP For Any Online Translation of Documents.