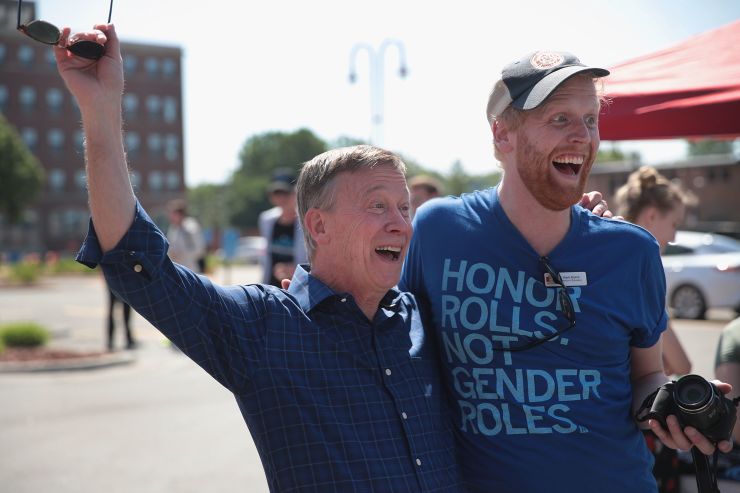 Many good policy ideas miss out on the daily cable news spin cycle — but it is not for a lack of trying. CNBC.com is interviewing presidential candidates this summer to gain insight on their vision and how it can impact the economic outlook for 37% of the 2020 electorate: millennials and Gen Z.

Set to be the first American generations to be worse off than their parents, facing the threat of climate change and struggling with how to pay for college, money matters matter to young voters in this election. This series is dedicated to giving every single candidate a platform to share their economic vision for America with the voters — and find out whether they prefer Hulu or Netflix or if a hot dog is a sandwich.

Hickenlooper: I would hold up as an example what we did in Colorado, where we were able to get the oil and gas industry to work with the environmental community and implement methane regulations. Methane is 25 times worse for climate change than CO2. We were able to do that in such a way that we made sure there was no red tape, that every dollar that was spent would actually make the air cleaner, and that the oil and gas industry and the environmental community would share a credit. Basically, we got everybody working together.

I understand the fierce urgency that we all need to address and resolve climate change: I’ve got a master’s in geology. A big part of that urgency has got to include bringing everybody together after the election. Republicans and Democrats, businesses and nonprofits. It’s going to be, it’s going to have to be all hands-on deck.

Hickenlooper: Well, there’s certainly a disconnect between the experience that young voters have with large companies and the experience of those of us who had parents from the greatest generation of World War II and the Great Depression. The concentration of wealth and power, which is what you see in these giant monopolies, again I’m not saying that Amazon or Facebook are monopolies yet, but in the end, they end up not being as good as they seemed at first.

I think many younger voters haven’t seen the effects of monopolistic behavior or how it actually ends up causing you to pay more for things and have fewer choices of what you want. Their experience with Amazon and Facebook has been an ever-expanding multitude of choices and actually putting a focus on trying to deliver lower cost to consumers. There’s a reason why we have such important laws against monopolistic behavior in this country.

Hickenlooper: Those statistics are outrageous and whenever you see such a stark contrast between people doing the same jobs and getting paid much different salaries, the logical conclusion is that we need to be able to level that playing field. Sometimes leveling that field is harder than it looks, but equal compensation is something where we do have some significant experience and certainly the laws we have that provide equal opportunity for all members of society are built on that.

I would promote the same types of legislation that we’ve had in the past to combat bias and prejudice in terms of equality. I would also make sure we update the Equal Pay Act and get it passed so that in those places where we can clearly demonstrate that there is the same work being done at differential in pay, that we’ve created a regulatory framework or a system of laws that prohibit such inequality. But again, it’s not so simplistic to think that’s going to be easy, just look how long we’ve been fighting for a equal pay between men and women or between various ethnic groups.

Hickenlooper: Well, that’s the sort of question I get asked all the time. The first question is why is college costing so much? These colleges function as kingdoms and as long as people are willing to pay these exorbitant increases every year, I think they’ll continue to find ways to spend the money.

I would find ways where people, by doing public service type jobs, like school-teaching in rural areas or health care in rural areas, could work off some of that debt. But I think it’s important to go back and address the inflation and equally important to recognize that for the last 30 or 40 years, 65% to 70% of our kids aren’t going to get a four-year degree and we’d done nothing but tell them they’re second-class citizens. So even as I believe in college and the value it adds, we’ve been promoting a dramatic increase in community colleges. We created an apprenticeship program in Colorado that’s now being rolled out in 22 different states and its directly oriented towards making sure that those kids who don’t go to college acquire the skills necessary to create a profession. It is their version of the American dream.

Hickenlooper: That depends on what, what aspect of socialism they embrace. People will argue that Social Security is a form of socialism, even though the employee and the employer both made contributions to the fund. I believe that the best solutions to the greatest challenges that we face are going to come from bringing not just government but business, nonprofits, and civil society to the table. Ultimately, that collaborative solution is going to have more benefits and be more permanent.

In Colorado, we got to near universal health-care coverage without a massive government expansion. We created some of the strongest measures to control climate change of any state in America. Without dramatic, draconian expansion of government, we got universal backgrounds for gun safety. We even became the No. 1 economy in the country. Part of why I’m running is that I’m the one person who’s done these things, these progressive things that Washington has failed to deliver. I have done them not by demonizing business, but by bringing business together with government and nonprofits.

“Text, images, and video are the paint swatches of 21st-century artists — with a single catch: this form of art has to communicate, engage, and sell.” ― Laura Busche – Visit THE ONLINE PUBLISHERS for high quality content creation services and professional, artistic photography.

Online Reputation Repair: How Does It Work?

Top 3 Reasons to Sell Your Photos to Thousands of Clients Online.

Getting The Best In Online Marketing With The Trend It Service.

Where To Go To Buy From An Online Photos Gallery.

TOP Gives Writers A Way To Earn More By Selling In The Ebooks Library.

3 Ways To Get Ahead Of Reputation Repair With TOP.

No Better Option For Online Reviews Than TOP.

2 Ways TOP Helps You Earn For Reviews You Write.

How Advertisers Can Get More Out Of A Site With TOP.