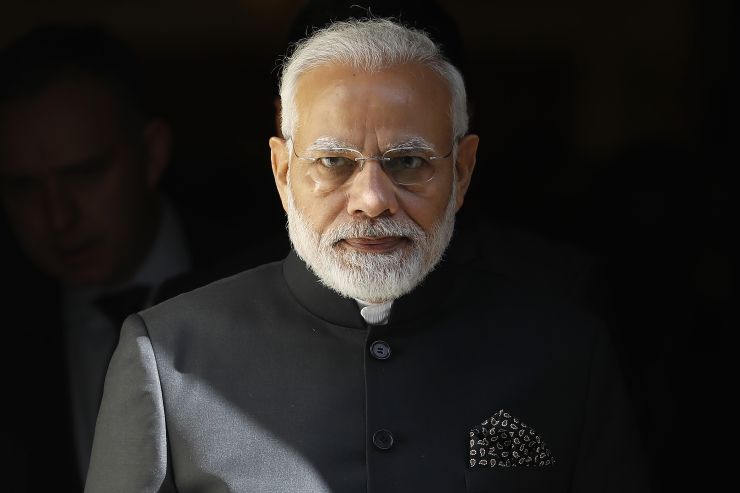 According to the Election Commission of India website, the BJP had won 109 seats and was leading the vote count in another 194 constituencies, which would give it a preliminary total of 303 seats. Out of 543 seats being contested in parliament, a party or a coalition will need at least 272 votes to form a government.

The Indian National Congress trailed Modi’s BJP. The Congress had won just 26 seats and led the counting in another 25 constituencies, which would give it a preliminary total of 51 seats.

To be clear, votes are still being counted and a final outcome is expected to be announced in the coming hours.

On Thursday afternoon, Modi tweeted, “Together we will build a strong and inclusive India. India wins yet again!”

The Wall Street Journal said Thursday that local-television estimates and the official government tally showed BJP and its allies were set to win more than 340 seats — a number that will allow them to form the majority in India’s lower house of parliament.

Earlier, investors cheered trends that pointed to a resounding victory for Modi and the BJP. But that optimism faded later in the day.

Expectations for Modi to carry out important, but challenging, reforms that will drive growth are high among investors and India watchers.

“There would be increased expectations of economic reforms going forward, particularly in the areas of factors of production like labor and land,” Sanjeev Prasad, senior executive director at Kotak Securities, told CNBC’s “Street Signs ” on Thursday. “The question is now whether some of the reforms can be delivered as easily as what the market would like to believe.”

Prasad pointed out that Modi’s government was unable to deliver some of the reforms in areas like land and labor during its previous term. “Let’s see over the next few months, whether the government is in a position to deliver on those expectations.”

More than 900 million people were eligible to vote in the polls that stretched over seven phases from April 11 to May 19. A record number of people had turned up to cast their ballot and voter participation was more than 67%, the Election Commission said, making it the largest-ever democratic exercise.

Out of 543 seats being contested in parliament, a party or a coalition will need at least 272 votes to form a government. On Thursday, votes from only 542 constituencies were being counted. Reports said polls in the Vellore constituency in the South had been cancelled. A new date has yet to be announced for elections there.

In this year’s elections, political parties resorted to their “traditional playbook of identity politics” to shore up support for their candidates, according to Pratyush Rao, associate director and lead analyst for India and South Asia at Control Risks.

“Political parties and key figures have, in recent weeks, spent more time hurling insults than debating policy proposals to tackle the country’s challenges,” he wrote in a note earlier this week.

Even if BJP appears dominant, analysts said that the party will still need the support of its allies within the coalition to pass politically contentious major reforms — such as amendments to India’s land and labor laws, disinvestment policies and subsidy reforms.

They will “continue to require intra-party consultations and support from other allies in the NDA as well as from state governments, before coming to fruition,” said Rao.

How Modi and the BJP fare at the polls will likely factor into his policy priorities.

If he comes back with a bigger mandate than what he had in the 2014 elections, it would be seen as an endorsement of his national security-focused campaign, according to Eurasia Group’s South Asia analyst, Akhil Bery. That, he added, would likely affect Modi’s foreign policy toward India’s arch rival Pakistan.

Earlier this year, BJP’s efforts to return to power looked to be on shaky grounds, especially after the party lost three key state elections in December. People across India have had mixed reactions to some of Modi’s landmark economic reforms and policies. They include the introduction of the Goods and Services Tax and demonetization — where the government unexpectedly withdrew all its 500 and 1,000-rupee notes, and replaced them with 500 and 2,000-rupee denomination currencies.

Then, a terrorist attack in Kashmir, and India’s subsequent response to it, shifted the momentum in Modi’s favor.

“That reinvigorated the campaign and took the attention away from, quite frankly, the not-so-great economic record,” Bery told CNBC’s “Squawk Box ” on Thursday.

“You had a slowing economy and also the leaked jobs report, which showed that India’s unemployment rate was at a 45-year high. By shifting to national security, Prime Minister Modi was able to take attention away from those negative stories, ” he added.

Still, Modi’s government will likely have its work cut out for it: India’s economy is slowing down, its shadow banking sector is in crisis, credit lending from banks is still relatively weak. More needs to be done to spur private investments so that the country doesn’t only rely on consumption to grow, according to analysts.

“Modi 2.0 will inhabit the roles of both economic moderniser and economic populist, contrary to his supporters and critics who have often sought to characterise him as either one or the other,” Control Risks’ Rao wrote.

He added that Modi will likely continue with his efforts to streamline the GST while continuing to empower India’s insolvency and bankruptcy code to tame the massive amounts of debts sitting in the banking sector — but he would not carry out a wholesale privatization of state-owned banks or loosen political control over lending decisions.

“At the same time, increased pressure over rural distress and unemployment will stoke Modi’s economic populist instincts, which will likely see an increased focus on rural spending and handouts aimed at supporting small and medium-sized enterprises,” Rao said.

How TOP Helps When You Need To Know How To Repair A Bad Reputation.

The rise of superbugs: Facing the antibiotic resistance crisis.

5 Tips to Keep Your Nails Strong.