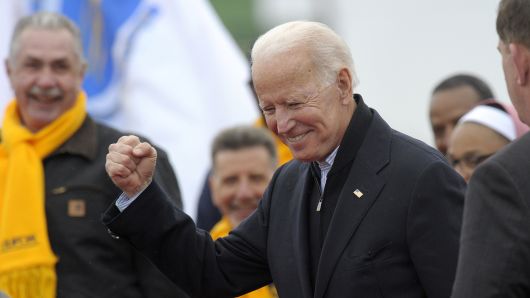 He made his announcement in a video posted on Twitter.

“Everything that has made America America is at stake. That’s why today I’m announcing my candidacy for president of the United States,” the 76-year-old Biden said in the 3½-minute video.

Biden’s first major campaign event is set for Monday in Pittsburgh, where he is expected to speak about rebuilding an inclusive middle class, according to NBC News. Biden will then launch a multistate campaign tour with a focus on states with early voting, where he will hash out his vision for closing the divides that are driving Americans apart, NBC reported.

Thursday’s announcement marks the unofficial end of the chaotic early phase of the 2020 presidential season. The field now features at least 20 Democrats jockeying for the chance to take on President Donald Trump next year. Several lesser-known candidates may still join the race.

Despite being widely viewed as an instant frontrunner in the race, Biden faces tough questions about whether his candidacy will be viable amid the crowded and diverse field of candidates.

It’s yet unclear if Biden will even receive an explicit endorsement from his political partner of nearly a decade — President Barack Obama.

A statement Monday morning praising Biden was sent by an Obama spokesperson: “President Obama has long said that selecting Joe Biden as his running mate in 2008 was one of the best decisions he ever made. He relied on the Vice President’s knowledge, insight, and judgment throughout both campaigns and the entire presidency. The two forged a special bond over the last 10 years and remain close today.”

Biden’s decision to run came despite accusations in March and April by several women that he touched them in ways that made them feel uncomfortable. In early April, Biden promised in a two-minute video to be “more mindful and respectful of people’s personal space.”

Despite entering the race later than most of the field, Biden has consistently led polls of Democratic primary voters ahead of Sens. Bernie Sanders and Kamala Harris, and South Bend, Indiana, Mayor Pete Buttigieg. This is Biden’s third run for the White House.

Biden’s announcement ends more than two years of speculation about whether he would launch a White House bid for the 2020 election, dating to President Donald Trump’s victory over former Secretary of State Hillary Clinton in November 2016.

Biden’s decision not to run for president in the 2016 contest helped clear the way for Clinton to become the Democratic nominee.

Trump did not immediately respond to the announcement video, in which Biden attacked the president for his remark that there were “very fine people on both sides” of a white nationalist rally and counterprotest in Charlottesville, Va., in 2017.

But the Republican National Committee had choice words for Biden in a statement to CNBC.

“Joe Biden has been running for president and losing since the ’80s. 2020 won’t be any different. Biden’s fingerprints are all over foreign policy blunders and the weakest economic recovery since World War II,” said RNC Communications Director Michael Ahrens. “We don’t need eight more years of Biden. Just ask President Obama, who isn’t even endorsing his right-hand man.”

Some have speculated that that decision, which Biden said was based in part on his enduring grief following the death of his 46-year-old son, Beau, to brain cancer in March 2015, might have cost him his best shot at the presidency.

In fact, if he had entered the 2016 fray, Biden would have started off as the most popular candidate, according to a September 2015 NBC News/Wall Street Journal poll.

With a resume boasting 36 years in the Senate representing Delaware and eight more in Obama’s White House, Biden’s status as an experienced Washington insider serves as just one of many contrasts with Trump.

Even before Biden announced his 2020 run, he led early polls of Democratic presidential candidates. His national name recognition and association with Obama, who enjoys high popularity as a White House alumnus, made him a top contender from the earliest stages of the campaign.