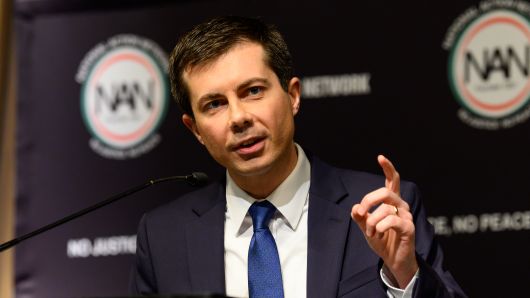 Democratic presidential hopeful Pete Buttigieg, continuing his war-of-words with fellow Hoosier Mike Pence, said the vice president could “clear this up” by taking a broad stance against discrimination.

“I’m not interested in feuding with the vice president,” Buttigieg said Thursday during a taping of “The Ellen DeGeneres Show.”

“But if he wanted to clear this up, he could come out today and say he’s changed his mind, that it shouldn’t be legal to discriminate against anybody in this country for who they are. That’s all.”

Buttigieg, the mayor of South Bend, Indiana, worked closely with Pence while Pence was governor. Since formally announcing his exploratory committee in late January, Buttigieg has rocketed to the upper tier of the Democratic presidential race. If successful, he would be the first openly gay nominee of a major party.

In an interview that aired Friday with CNBC’s John Harwood, Buttigieg described himself as “the only Maltese-American Episcopalian gay veteran that I know.”

Pence, in a CNN interview that also Friday, Pence said he considered Buttigieg a friend, and didn’t “believe in discrimination against anybody. I treat everybody the way I want to be treated.”

“Pete has his convictions, I have mine,” Pence said.

Pence has long faced criticism from LGBT activists for his opposition to gay marriage and his support for legislation that his critics said targeted gays and lesbians. Pence has noted that as governor, he worked to implement the Supreme Court decision that made gay marriage the law of the land.