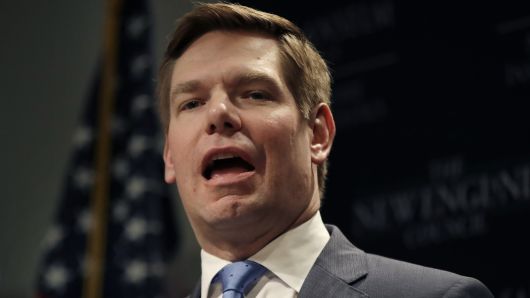 The congressman, who announced his bid in the crowded Democratic on Monday, is proposing a ban on and federal buyback of all 15 million assault weapons in the U.S. The 38-year-old congressman wants to exempt law enforcement agencies and shooting clubs.

“We should take the most dangerous weapons out of the hands of the most dangerous people,” Swalwell said in his campaign launch video. The video also plays up his roots in Iowa, a state that could be critical because it’s the first to hold a caucus for the 2020 presidential elections.

“You look your family in the eyes and ask, ‘how is our future any better off than before this guy came around,’ ” Swalwell says in the campaign video. He made his 2020 announcement on Monday evening on CBS’ “The Late Show with Stephen Colbert.”

Swalwell has proposed a variety of initiatives to create more jobs and opportunities, including workforce training, infrastructure investment and tax changes to boost growth in low-income communities.

Still, Swalwell is seen as a long-shot candidate with several other rivals already showing stronger polling among likely voters, including former Vice President Joe Biden, Sen. Bernie Sanders of Vermont and Sen. Elizabeth Warren of Massachusetts. An Iowa Poll released a month ago of likely caucus participants in the state found Swalwell wasn’t a first choice of any survey participants.

Swalwell, a four-term lawmaker, is scheduled to hold a town hall event Tuesday in Florida with parents who lost kids when a gunman opened fire at Marjory Stoneman Douglas High School in Parkland, Florida. The massacre left 17 students and teachers dead.

As a prosecutor in Oakland, Swalwell tried murder cases and crimes involving the use of military-style assault weapons. He comes from the same San Francisco Bay Area district attorney’s office as another 2020 presidential candidate, Sen. Kamala Harris of California.

Also, Swalwell’s father is a former police chief in Iowa, and two of his three brothers are in law enforcement.

“My dad used to take me hunting when I was a kid,” Swalwell told CNBC in February. “When I was a prosecutor, I would go to the range and shoot to understand the weapons on the streets.”

In 2013, he co-sponsored a bill to ban assault weapons shortly after being sworn in as a member of Congress. The legislation, similar to a ban that expired in 2004, failed to get through Congress.

His positions on gun legislation have been criticized by gun lobby groups, including the National Rifle Association.

Besides an assault weapons ban, Swalwell wants background checks on all gun purchases and investments to prevent gang violence. He also reintroduced a bill in February to help protect victims of domestic violence from being killed with guns.

The Democrat’s campaign headquarters is in California, and he has already hired staff in several early voting states, including Iowa, New Hampshire and South Carolina. Swalwell is scheduled to return to Iowa and South Carolina later this week.

A frequent guest on cable shows, Swalwell was elected to his first term in Congress in 2012 by defeating Rep. Pete Stark, a 40-year Democratic incumbent. Besides serving as a prosecutor, he also was a city councilman in Dublin, a suburb in the East Bay Area.

The lawmaker has said he’s the first in his family to go to college and is prepared to give up his seat in Congress to run for president. He pledged not to appear on the ballot for both president and Congress.

“Americans need a leader who can connect to them,” Swalwell told CNBC in February, noting he and his wife, Brittany, have two young kids and nearly $100,000 in student loan debt. “We’re very connected to grit and struggle and the belief that if you work hard, you do better and dream bigger. I think you need to have that in the Oval Office.”

‘ Content is king, but engagement is queen’  The online publishers