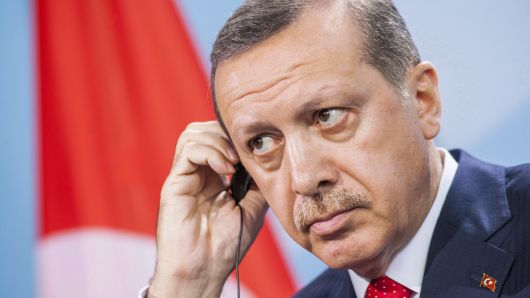 Turkish President Recep Tayyip Erdogan’s Justice and Development Party (AK Party) has lost the capital Ankara and looks set to lose the commercial hub of Istanbul after 25 years in power in both cities, as Sunday’s municipal election results — largely seen as a referendum on the president himself — roll in.

The Turkish lira fell sharply at the opening of London trade on Monday, the latest rout after a turbulent week that saw Turkey’s overnight swap rate shoot up as high as 1,200 percent as the central bank tried to shore up the currency.

The lira sunk at roughly 8:30 a.m London time Monday after the country’s election board said the opposition party was ahead in Istanbul’s mayoral election, briefly trading at $5.6913. But by 1:00 p.m. the currency had regained those losses and was trading at $5.5212.

The currency had traded at 5.61 to the dollar after the initial results came in on Sunday evening, compared with 5.55 at Friday’s close. The country’s BIST 100 stock index was down 1.65 percent in the morning session, after falling more than 7 percent last week.

“The events of the last 12 to 18 months have caused a lot of grief to the business community, the financial services, and also the investors and their confidence.” -Sanjay Uppal, CEO, StraitsBridge Advisors

Markets now fear that the electoral losses will push Erdogan to double down on populist policies that helped send the currency tanking last year, when his interference in central bank independence held interest rates down despite soaring inflation and sent investors running for the hills. Last year saw the lira lose as much as 40 percent of its value against the dollar, although it had trimmed some of those losses by year end.

The victories claimed by the opposition Republican People’s Party (CHP) are a formidable blow to the ruling right-wing AK Party — particularly the expected loss of Istanbul, where Erdogan first made his political debut as city mayor in the 1990s. Still, the AK Party and its far-right coalition partner the Nationalist Movement Party (MHP) secured more than 50 percent of the national vote and won a majority of Istanbul’s districts.

Currency worries and unemployment are main concerns for Turkey: Advisor   7 Hours Ago | 02:53

“It appears that the worsening economic condition of the household had a say on the results,” Can Selçuki, general manager of Istanbul Economics Research, told CNBC on Monday morning.

“A combination of economic conditions and candidates that has appeal to both sides of the aisle has helped the opposition to win a number of large cities including Ankara, Adana, Mersin, Antalya and very likely Istanbul.”

Market will look for reforms

Voters went to the polls with a major concern at the top of their list: the economy. Given this, the results shouldn’t take anyone by surprise, said Sanjay Uppal, CEO of StraitsBridge Advisors.

“The events of the last 12 to 18 months have caused a lot of grief to the business community, the financial services, and also the investors and their confidence,” Uppal told CNBC’s “Capital Connection” on Monday.

“On the back of this, the current reforms so far haven’t delivered a message that would bring that confidence back … So the populace has voted for an alternative to balance out the national government.”

Turkey’s economy fell into a recession last year, and unemployment is now around 13 percent, nearly a decade high. Inflation sat at 19.7 in February — though that’s the first time it’s dropped below 20 percent since August.

Turkey’s AKP and opposition party both declare victory in Istanbul   7 Hours Ago | 03:05

“The market will now want to see what reforms the AKP is going to roll out, after the new promises made by Erdogan,” Timothy Ash, senior emerging markets strategist at Bluebay Asset Management, commented in an email note Monday, noting that the president will remain powerful and well-supported among his more religious and rural base.

“The actual election results don’t change that much, Turkey still faces huge economic challenges based around a loss of confidence in policy making,” he said.

“First and foremost confidence in economic policy making has to be rebuilt to stop the trend of rising dollarization … AKP government (is) over 50 percent nationally, promising reform, and they now have to deliver otherwise markets will punish Turkey brutally. That is the lesson from recent months.”

Rebuilding credibility will be crucial

The drop in the lira has led to the weakening of consumer purchasing power and caused acute pain for Turkish banks and businesses with high dollar-denominated debt — reports have put the volume of Turkey’s foreign-currency denominated corporate debt at 50 percent of the country’s GDP (gross domestic product).

Erdogan is credited with transforming Turkey’s economy into a powerhouse in the early 2000s, drawing unprecedented foreign investment and creating more than 1 million jobs. But recent years have seen the leader adopt a more populist and nationalist bent, featuring various diplomatic spats with Western allies, while consolidating executive power through constitutional changes and a heavy crackdown on dissent.

Turkey’s large current account deficit, its shrinking foreign exchange reserves, and relations with key Western allies remain top challenges for the country — the lira is set to remain “on the front line over the next few weeks” until the government resolves those issues, Ash said.

And the central bank’s efforts to prop up the currency will run out of steam as it’s already burned through one-third of its foreign reserves in the first three weeks of March alone.

“(Turkish Finance Minister) Albayrak has to come up with a program to convince markets and importantly locals that the current management team know what they are doing, rebuilding credibility in the process,” Ash said. “If they are not able to do this under their own steam, then it is hard to imagine a scenario where they can avoid going to the IMF.”

Sell your photos online with the online publishers