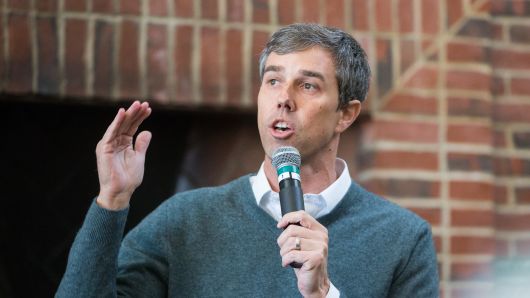 A leading Democratic bundler who helped former President Barack Obama raise money during his two presidential campaigns has been indicating to friends that he’s likely to support Beto O’Rourke in the 2020 race, CNBC has learned.

Mark Gallogly, the co-founder of investment firm Centerbridge Partners, has signaled to associates that he’s likely going to help O’Rourke, a former three-term congressman, in the presidential fundraising battle, according to people who have spoken with him in recent weeks.

Gallogly became fond of O’Rourke during his midterm contest with Sen. Ted Cruz in the deep-red state of Texas. The donor backed O’Rourke in 2018 and wrote two checks each worth $2,700, one for the primary and the other for the general election, Federal Election Commission filings show.

Gallogly also donated to the re-election campaigns of Democratic Sens. Cory Booker of New Jersey and Kirsten Gillibrand of New York, who are also running for a shot to take on President Donald Trump in 2020.

The development comes as big-money donors largely remain on the sidelines of the Democratic primary field, particularly as several of them wait for former Vice President Joe Biden to decide whether he will join the race.

Gallogly did not return repeated calls, texts and emails seeking comment. Representatives for Centerbridge Partners and O’Rourke’s campaign also did not return emails for comment.

During his shockingly close loss to Cruz, O’Rourke raised tens of millions of dollars, with almost 45 percent coming from so-called small donors, or people who gave $200 or less. However, 53 percent of the contributions came from donors who wrote larger checks, including some donations from executives at prominent technology companies.

He finished his Senate run bringing in almost $80 million. His presidential campaign announced earlier this week that he raised $6.1 million within the first 24 hours of his 2020 White House run. O’Rourke has repeatedly said he would not accept donations from corporations, political action committees or special interests.

Political bundlers help campaigns by working the donor circuit behind the scenes and persuading high-dollar financiers to back a particular candidate. It remains unclear whether Gallogly will directly bundle for O’Rourke or if he will merely donate to his campaign.

The investment executive helped Obama’s 2008 campaign raise between $200,000 to $500,000, according to data collected by the nonpartisan Center for Responsive Politics. In 2012, Gallogly bundled at least $500,000 for Obama, records show. In both election cycles, donors from the securities and investment industry helped Obama raise at least $35 million between his two White House runs.

Obama privately met with O’Rourke last year and compared the Texas Democrat’s campaign against Cruz to his own campaigns, the former president said in a recent interview with his chief political strategist, David Axelrod.

“The reason I was able to make a connection with a sizable portion of the country was because people had a sense that I said what I meant,” Obama said at the time. When pressed on whether O’Rourke reminded him of trying to encapsulate the same methods of campaigning, Obama said, “Yes, and I think there are others. We’ve got a number of people who are thinking about the race who I think fall in that same category.”

Another high-profile former Obama bundler has already jumped on the O’Rourke bandwagon.

Louis Susman, former U.S. ambassador to the U.K. and another lead fundraiser for Obama, has publicly signed on to helping O’Rourke raise campaign cash. In a recent interview with CNBC, Susman said he’s spoken with “family and friends” while in “coordination with the campaign.”

Before becoming an ambassador under Obama, Susman bundled at least $500,000 during Obama’s first run for president in 2008, the Center for Responsive Politics shows.