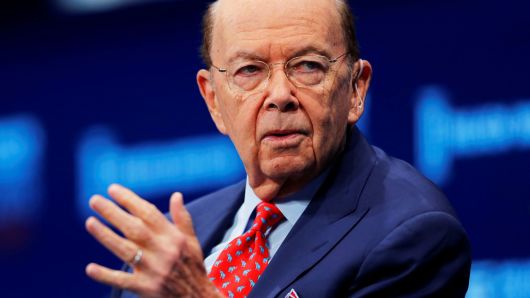 The government’s top ethics watchdog disclosed Tuesday that it had refused to certify a financial disclosure report from Commerce Secretary Wilbur Ross.

In a filing, the Office of Government Ethics said it wouldn’t certify the 2018 annual filing by Ross because he didn’t divest stock in a bank despite stating otherwise. The move could have legal ramifications for Ross and add to pressure for a federal probe.

“The report is not certified,” OGE Director Emory Rounds said in a filing, explaining that a previous document the watchdog received from Ross indicated he “no longer held BankUnited stock.” However, Rounds said an Oct. 31 document “demonstrates that he did” still hold the shares and as a result, “the filer was therefore not in compliance with his ethics agreement at the time of the report.”

A federal ethics agreement required that Ross divest stock worth between $1,000 and $15,000 in BankUnited by the end of May 2017, or within 90 days of the Senate confirming him to the Commerce post. He previously reported selling the stock twice, first in May 2017 and again in August 2018 as part of an annual disclosure required by OGE.

However, Ross didn’t sell the stock in the agreed upon time period in 2017 and then made the two filings indicating he did, the Center for Public Integrity first reported in December 2018. The nonprofit, which obtained the OGE documents, claimed Ross’s failure to sell the stock was “the latest in a series of inaccurate statements and omissions in Ross’ personal financial statements.”

“While I am disappointed that my report was not certified, I remain committed to complying with my ethics agreement and adhering to the guidance of Commerce ethics officials,” Ross said Tuesday in a statement. He said the BankUnited stock he owned was awarded when he was a director of the Florida-based bank from 2009 and 2014.

Ross said the “100 shares were worth approximately $3,700, an amount that federal regulations deem de minimis and below the threshold of a possible conflict of interest. Therefore, even if a BankUnited matter had come before the Department while I owned the shares — and I have not been made aware of any such matter — I would not have been disqualified from working on it.”

The Commerce secretary further explained that the shares “were held in book entry form by BankUnited’s stock transfer agent. I previously reported selling the shares on May 31, 2017 based on a mistaken belief that the agent executed my sell order on that date. As soon as I learned that the shares had not been sold, I again took action to direct their sale and disclosed the sale of these 100 shares on October 31, 2018, correcting the only known error in my annual report.”

There have been calls before for an investigation on stock-related issues involving Ross, including claims he may have violated a criminal conflict of interest law.

Steve King plans to seek re-election: ‘I have nothing to apologize for’. To more electionsowl.com
Jeff Daniels