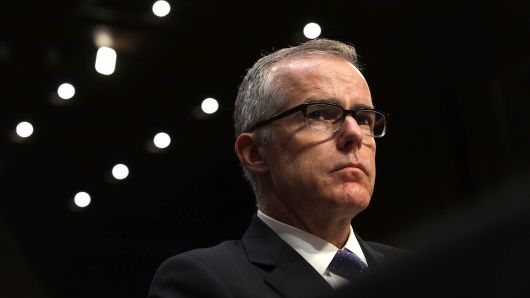 Justice Department officials were so concerned about President Donald Trump’s fitness for office in May 2017 that they discussed whether Trump could be removed from office by convincing Vice President Mike Pence and a majority of the president’s Cabinet to invoke the 25th Amendment of the Constitution, former FBI Deputy Director Andrew McCabe reportedly says in a new interview.

Those discussions came on the heels of Trump’s dramatic firing of FBI Director James Comey on May 9, 2017, according to McCabe’s interview with CBS’ “60 Minutes,” scheduled to air Sunday evening.

Comey’s dismissal led to the appointment of special counsel Robert Mueller, the former FBI director who is investigating whether Trump’s presidential campaign colluded with Russians interfering in the 2016 election. Mueller is also probing whether Trump sought to obstruct the Justice Department’s earlier inquiry into that question by ousting Comey and other means.

Trump has denied any wrongdoing.

“The most illuminating and surprising thing in [McCabe’s] interview to me were these eight days in May when all of these things were happening behind the scenes that the American people really didn’t know about,” “60 Minutes” correspondent Scott Pelley said Thursday on “CBS This Morning.” Pelley interviewed McCabe for the show.

“There were meetings at the Justice Department at which it was discussed whether the vice president and a majority of the Cabinet could be brought together to remove the president of the United States under the 25th Amendment,” Pelley said.

“These were the eight days from Comey’s firing to the point that Robert Mueller was appointed special counsel,” Pelley added. “And the highest levels of American law enforcement were trying to figure out what do with the president.”

Section 4 of that amendment states that the vice president and a majority of either the Cabinet or “such other body as Congress” may make the vice president the acting president when they inform the Senate’s president pro tempore and the speaker of the House that “the President is unable to discharge the powers and duties of his office.”

Pence, during an interview with NBC News on Thursday, said he was never aware of any discussion of invoking the 25th Amendment to remove Trump from office.

“I’ve never heard any discussion of the 25th Amendment by members of the government and I would never expect to,” Pence said. “Frankly I find any suggestion of it to be absurd.”

McCabe’s interview with “60 Minutes” is part of a promotion effort for his new book, “The Threat: How the FBI Protects America in the Age of Terror and Trump.”

McCabe was fired last March by then-Attorney General Jeff Sessions, who said at the time that both the Justice Department’s Office of the Inspector General and the FBI’s own internal watchdog had found McCabe made “an unauthorized disclosure to the news media,” and “lacked candor — including under oath — on multiple occasions.”

Pelley said Thursday that McCabe confirmed prior reports that Deputy Attorney General Rod Rosenstein offered to wear a recording device during his meetings with Trump. The Justice Department has said Rosenstein’s offer was a sarcastic one.

But Pelley said McCabe told him that the offer “came up more than once and it was so serious that he took it to the lawyers at the FBI to discuss it.”

On Thursday, the Justice Department reiterated its denial of McCabe’s claims about Rosenstein, and said that Rosenstein did not believe there were any grounds to remove Trump from office via the 25th Amendment.

“The Deputy Attorney General again rejects Mr. McCabe’s recitation of events as inaccurate and factually incorrect,” the Justice Department said in a statement.

The same statement noted that the Justice Department’s inspector general “found that Mr. McCabe did not tell the truth to federal authorities on multiple occasions, leading to his termination from the FBI.”