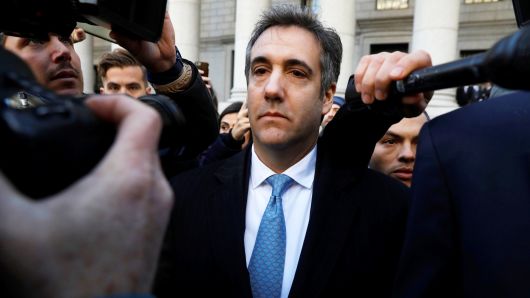 The Republican chairman and ranking Democrat of the Senate Select Committee on Intelligence on Tuesday blasted President Donald Trump’s former lawyer Michael Cohen for missing a planned appearance before that committee due to purported medical issues, less than a month before he is due to begin serving a three-year prison sentence.

Committee Chairman Sen. Richard Burr, R-N.C., said any “good will” that committee had toward Cohen is gone after reports that Cohen has been out in New York at night socializing despite claiming he needed to postpone Tuesday’s scheduled hearing because he is still recovering from shoulder surgery.

The Intelligence Committee, which last month issued a subpoena to Cohen compelling his testimony Tuesday in a closed session, had granted that requested delay, Cohen’s lawyer Lanny Davis had said Monday.

Davis said the committee would announce a “future date” for testimony from Cohen, who pleaded guilty last year to lying to Congress, financial crimes, and campaign finance violations related to hush-money payments to two women who claim to have had affairs with Trump. The president denies having sex with either woman.

“According to the press we still have Michael Cohen to interview one more time, but I can assure you that any good will that might have existed in the committee with Michael Cohen is now gone,” Burr fumed to reporters Tuesday.

Asked if there was a chance the committee will not get to interview Cohen before he begins serving a three-year prison term on March 6, Burr said, “I don’t know, you’d have to ask him about it.”

“He’s had a letter for six months asking for his return” to appear before the committee, Burr said.

“He’s already stiffed us on being in Washington today because of an illness,” Burr said. “You have, um — on Twitter, a reporter reported he was having a wild night Saturday night eating out in New York with five buddies. Didn’t seem to have any physical limitations. And he was out with his wife last night.”

Asked if he would issue another subpoena to Cohen, Burr said, “I’ve never gotten into who we have subpoenaed and haven’t subpoenaed.”

“But I think he clearly rises to one of the people that I would go to every length I could to make sure that we got his testimony,” Burr said.

“I would prefer to get him before he goes to prison … but, you know, the way he’s positioning himself [by] not coming to the committee, we may help him go to prison,” Burr quipped.

“You would think that someone — we’ve been trying to work with Mr. Cohen — and somebody whose veracity is in somewhat question, you’d think he would want to not do things that further diminish his ability for people to have faith in him,” Warner said.

Cohen’s lawyer Davis said his client was suffering from pain after shoulder surgery and is taking medication that would make it “impossible” for him to testify this week:

Despite Senator Burr’s inaccurate comment, Mr. Cohen was expected to and continues to suffer from severe post shoulder surgery pain, as confirmed by a letter from his surgeon, which was sent to Senator Burr and Senator Warner. The medication Mr. Cohen is currently taking made it impossible for him to testify this week. It should be noted that Mr. Cohen committed to all three committees that he would voluntarily testify before the end of the month. We believe Senator Burr should appreciate that it is possible for Mr. Cohen to be in pain and still have dinner in a restaurant with his wife and friends.

Cohen so far has had three planned appearances before a congressional committee postponed.

He originally was expected to testify publicly last Friday before the House Oversight and Government Reform Committee.

But in late January, Cohen postponed that appearance indefinitely because of concerns about his family’s safety, Davis said. Davis accused Trump and his current lawyer, Rudy Giuliani, of making “threats,” specifically by suggesting Cohen’s father-in-law was engaged in wrongdoing.

Trump later said of Cohen, “I would say he’s been threatened by the truth.”

Cohen is currently scheduled to testify Feb. 28 before the House Intelligence Committee in a session closed to the public. That appearance originally was set for last Friday as well, but was postponed by committee chairman Rep. Adam Schiff, D-Calif., for what Schiff said was “the interests of the investigation.”

Cory Booker announces he is running for president. To more information electionsobserver.com