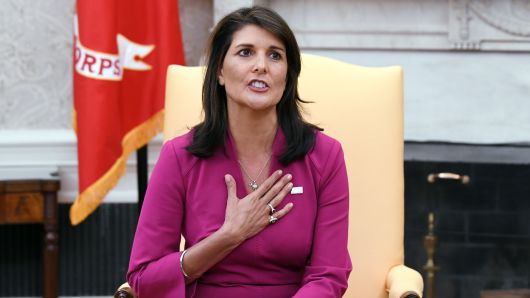 With the Trump Cabinet’s revolving door continually spinning, organizations looking for an inside glimpse into the administration have increasing options – but they come with increasingly higher price tags.

Former U.S. Ambassador to the United Nations Nikki Haley is currently quoting $200,000 and the use of a private jet for domestic speaking engagements, according to seven people with knowledge of the arrangement, who spoke on condition of anonymity because such quotes aren’t made publicly available. Engagements outside the United States could cost considerably more, these people said.

In her October resignation letter, Haley said she would be taking a “step up” into the private sector after leaving the UN. At the rate quoted for her engagements, just a handful would pay down more than $1 million in debt outstanding that was accrued during her 14 years of public service, according to a public financial disclosure report based on 2017 data.

Haley’s spokesperson did not respond to an e-mail, text and call seeking comment.

But it may raise questions if she decides to re-enter the political fray. Haley’s lucrative fee propels her into a league populated by U.S. presidents, former Federal Reserve chairman Ben Bernanke, former first lady Michelle Obama and former Secretary of State Hillary Clinton. Charging roughly $225,000 apiece, Clinton brought in nearly $22 million from a wide range of engagements between leaving office in 2013 and running for president in 2015, according to an Associated Press investigation. That led to criticism from opponents who claimed she was influenced by special interests and calls for the event transcripts to be published.

Scott Amey, general counsel at the Project on Government Insight, says there is nothing inherently wrong with getting paid to tell one’s story, but the question for former federal officials is what their motive and intent are in doing so.

“When they come into public service, are they truly working in interest of the public or are they more focused on cashing in on opportunities when they leave?” Amey says.

Upon leaving the UN post at the end of the year, Haley signed with the Washington Speaker’s Bureau, which also represents former Trump officials Gen. H.R. McMaster and Gen. John Kelly, according to two people with knowledge of the situation.

The going rate to book McMaster and Kelly could not be confirmed but was quoted to people inquiring in ranges at less than half of Haley’s rate – a fact that underscores the perceived value of her future political viability and her remaining in Pres. Trump’s good graces.

Gen. Kelly is advertised as a speaker at the Skybridge Alternatives Conference in May, the annual investing summit hosted by short-lived White House communications director Anthony Scaramucci.

Washington Speakers Bureau, which does not list the three officials on its web site, did not respond to a voicemail seeking comment.

Haley said she would support Trump in his 2020 re-election but did not rule out a run of her own after that. Her resignation was announced from the Oval Office with Trump by her side, while McMaster and Kelly departed relatively quietly after months of clashing with the president.

Nels Olson, who advises federal officials transitioning to the private sector, said it’s normal for Cabinet officials to hit the speaking circuit while they are household names before settling into a new full-time role.

“There’s sort of a half-life to these things,” said Olsen, vice chairman and global government affairs leader at Korn Ferry. “There’s usually demand for the first six months to a year [after exiting the White House], but then it tapers off.”

Cohn has accepted gigs at the National Multifamily Housing Council, a Miami conference for Context Capital Partners, and a corporate event at the World Economic Forum in Davos.

The White House, which has panned former West Wing officials for profiting off books chronicling their White House tenure, did not respond to a request for comment.

Trump loses support among his core voting groups as the shutdown drags on, polls say. >>> electionsobserver.com