Latest Blogs
Home People In her shutdown battle with Trump and the GOP, Nancy Pelosi drew a line on governing 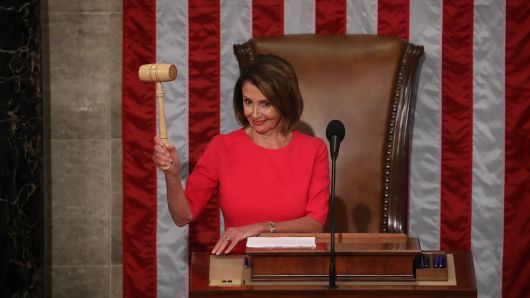 In her shutdown battle with Trump and the GOP, Nancy Pelosi drew a line on governing

As the shutdown damage grew more urgent – for federal workers, consumers of government services, the economy – so did the question: when will Republicans say, “enough”?

“We’ve been there before,” Pelosi told a small lunch gathering of journalists on Friday.

Pelosi recalled the 2013 debacle that preceded Trump’s presidency by more than three years. Republicans were so intent on shutting government down that then-Speaker John Boehner wouldn’t risk a floor vote even after Democrats agreed to lower, GOP-prescribed funding levels.

Before Boehner surrendered, as Trump did under duress last week, his right wing kept insisting that President Obama destroy Obamacare, too.

“This is who they are,” Pelosi said. “This has become an anti-governance party.”

That description underscores the limits of her victory. Pelosi did not pass a Democratic policy objective like Medicare for All, tax hikes on the rich, or tuition-free college. She prevailed merely in re-opening the government.

It was not easy because, as a matter of belief and electioneering, traditional Republican skepticism of government has marbled into contempt. It was winnable because, once again, Republican demands pushed beyond the bounds of public sentiment.

The pattern has grown familiar. Objections from their own constituents have repeatedly forced Republicans to roll back budget cuts they made Obama accept after triggering the 2011 debt crisis. Public resistance kept them from repealing Obamacare even after Obama left office.

In 2016, Trump touted a “great wall” financed by Mexico as his solution for immigration woes that “incompetent” previous administrations hadn’t handled. The pledge, although transparently fanciful, galvanized campaign audiences.

Then-Speaker Paul Ryan mocked it. Rep. Mick Mulvaney of South Carolina – among those who egged on the Obama-era debt and shutdown crises – called it “childish.” 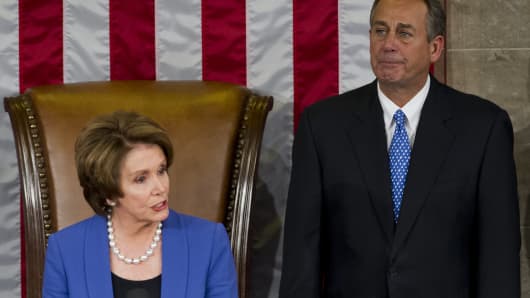 Saul Loeb | AFP | Getty Images
US Representative John Boehner, Republican of Ohio, reacts after being re-elected as Speaker of the House alongside US Representative Nancy Pelosi, Democrat of California and returning Minority Leader, during the opening session of the 113th US House of Representatives at the US Capitol in Washington, DC, on January 3, 2013.

After Trump won, the GOP Congress politely sidetracked the pledge for fear of angering his core supporters. Then, with his political and legal troubles mounting after Democrats won back the House, Trump decided to force the issue in December.

With the gavel and majority support on her side, Pelosi drew her line against a White House policy of make-believe.

Pelosi and Senate counterpart Mitch McConnell spent years as colleagues in the world of congressional appropriations. With granular control over checks written for specific projects and programs, it’s the ultimate governing venue on Capitol Hill.

That shared experience, she said, made it “particularly painful to see him kowtowing to the president” during the shutdown. Now, in defense of the congressional oversight prerogative, she seeks common cause with Republicans against tactics Trump used unsuccessfully against her.

After Pelosi delayed his State of the Union address, Trump grounded the Air Force plane she and other lawmakers planned to take to review conditions in wartime Afghanistan. When the lawmakers arranged to fly commercially instead, the administration denied them military support and insisted they seek permission from Mulvaney, the ex-Freedom Caucus firebrand turned acting White House Chief of Staff.

“Ask Mick Mulvaney? You must be kidding,” Pelosi recounted. “That is a complete violation of separation of powers. That’s not going to stand.”

For now, Trump appears chastened by her forcefulness. He applies no derisive nickname.

The president accepted her decision to delay the State of the Union – now set for Feb. 5 – as “actually very reasonable.” He rarely accepts rebuffs so tamely.

“Some people think that’s because he understands the power of the speaker,” Pelosi explained. By contrast, she added, under Ryan’s stewardship “he understood the power of a rubber stamp.”

Pelosi insisted she would welcome yielding the spotlight to one of the Democratic women running to defeat Trump in 2020. By her performance the last month, she may have made that possibility a bit more likely.