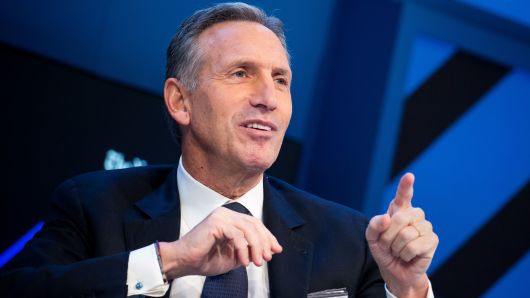 Former Starbucks Chairman and CEO Howard Schultz, who is launching a book tour this week, said he’s “seriously thinking of running for president” as a centrist who is positioned outside the two-party system.

With the field of contenders to challenge President Donald Trump growing daily, the 65-year-old coffee impresario who turned a local Seattle chain into a global coffee behemoth, is weighing the idea of an independent bid, he told 60 Minutes, CBS’s flagship news magazine.

“I am seriously thinking of running for president. I will run as a centrist independent, outside of the two-party system,” the self-described lifelong Democrat told CBS, denouncing the “reckless failure of [the] constitutional responsibility” of both Democrats and the GOP.

“We’re living at a most-fragile time not only the fact that this president is not qualified to be the president, but the fact that both parties are consistently not doing what’s necessary on behalf of the American people and are engaged, every single day, in revenge politics,” Schultz added.

The 60 Minutes interview is timed to the release of Schultz’s book, “From the Ground Up,” which weaves together parts of his personal biography and his vision for the country. The Brooklyn native — who’s worth at least $3 billion, according to Bloomberg data, is still a relative political unknown. It is not clear where Schultz stands on a number of issues that are likely to be contentious on the campaign trail.

Speculation has swirled around Schultz’s second act after Starbucks for at least two years, and the 60 Minutes interview sets the stage for what is shaping up to be a fierce battle for the White House.

In an article published over the weekend by The Atlantic, Democratic insiders are said to be deeply concerned about Schultz’s potential run. They are reportedly concerned that a third-party bid would siphon off Democratic votes, and ensure a re-election for Trump, a subject that Schultz addressed in his CBS interview.

“I want to see the American people win. I want to see America win,” Schultz told 60 Minutes. “I don’t care if you’re a Democrat, Independent, Libertarian, Republican. Bring me your ideas. And I will be an independent person, who will embrace those ideas. Because I am not, in any way, in bed with a party.”

Yet in the interview, the former executive struck a progressive tone on virtually every major topic broached by his interviewer. He declared his support for open immigration, taxes, climate change and universal health care–even as he chided the major parties over the polarized political climate and fiscally irresponsibility.

Yet on the idea of free health care, he blasted Democrats for offering a “false” promise that was the equivalent of the border wall proffered by the president, calling it something “the country cannot afford.”

Schultz will face fierce headwinds in putting together a national political operation that can be competitive, as he has started later in the game than most top contenders. As of November 2018, Schultz had not traveled to key early contest states Iowa and New Hampshire.

In a series of posts on his newly inaugurated Twitter account, Schultz declared his love for America, and a desire to “create opportunities” for everyone.

The former Starbucks chief’s entrance into the race is likely to unsettle progressives, though, whom Schultz has criticized for having what he considers unrealistic goals. Schultz told CNBC last year that the “greatest threat domestically” was the national debt and said cutting entitlement spending was essential.

“I look at both parties we see extremes on both sides…with approximately $21.5 trillion of debt, which is a reckless example, not only of Republicans, but of Democrats, as well,” he told CBS in his interview.