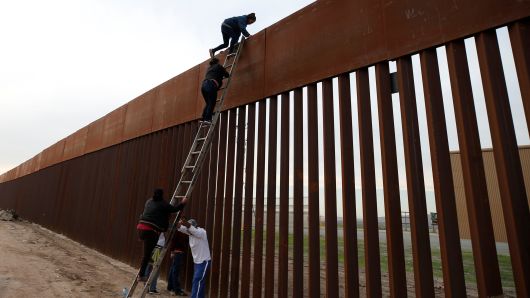 Most Americans agree with President Donald Trump that a “crisis” is taking place at the southern U.S. border.

They just do not think the president’s proposed border wall will solve the problems.

Trump has cast immigration on the U.S.-Mexico border as a “humanitarian crisis” as he argues for more than $5 billion to build the barrier. A dispute over the funding led to a partial government shutdown now in its 25th day, the longest ever. Trump has insisted on wall money as a condition of reopening nine federal departments, while Democrats have urged him to support a House-passed plan to fund the government without resources for the barrier. Most Americans blame Trump for the closure.

Talks crumbled last week as hundreds of thousands of federal worker started to miss paychecks and numerous services were disrupted. As a resolution appeared elusive Tuesday, Trump again made his case for a wall.

In tweets, the president claimed that “only a Wall, or Steel Barrier, will keep our Country safe!” To boost his argument, he said “polls are now showing that people are beginning to understand the Humanitarian Crisis and Crime at the Border.”

Most voters do see a humanitarian crisis at the border — just not necessarily the kind the president describes, according to a Quinnipiac University poll released Monday. Majorities also said the wall is not needed to secure the border, would not make the U.S. safer and would not be a good use of taxpayer money, according to the survey.

“While [American voters] believe there is both a humanitarian and a security crisis along the southern border, they absolutely don’t think a wall will solve the problem,” Tim Malloy, assistant director of the Quinnipiac University Poll, said in a statement accompanying Monday’s poll.

Here’s what the poll shows:

Trump’s tweet also claims people have started to understand “crime at the border.” The Quinnipiac Poll offers no evidence to back up the argument.

In fact, only 29 percent of respondents said undocumented immigrants are more likely to commit crimes than American citizens, while 63 percent answered that they are not.