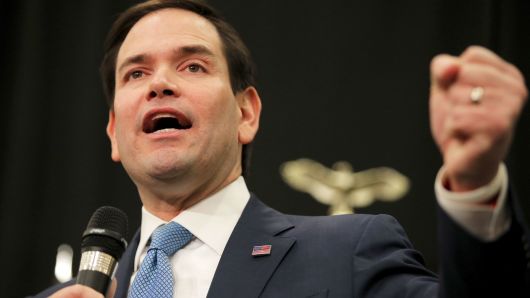 The Florida Republican contended Trump was elected on the promise of building a wall along the U.S.-Mexico border and the president has to “keep that promise.” But “we have to be careful about endorsing broad uses of executive power,” he added. “I’m not prepared to endorse that right now.”

Rubio joined “Squawk Box” as the partial government shutdown entered its 19th day due to the stalemate between Trump and Democrats on funding for a border wall. In a prime-time TV address Tuesday night, Trump made his case for a wall, highlighting multiple grisly examples of Americans allegedly murdered by undocumented immigrants.

Rubio said he would’ve liked the president to clarify during his address that the request for $5 billion in border security funding is not for a wall or a loan. “It’s $5 billion to fund the top 10 projects on a border security program by the experts and the people in charge of doing that,” Rubio said.

Asked whether he supports Trump’s position, which includes the wall, Rubio said, “Anything that makes the border more secure, I’ll be in favor of supporting.”

Ahead of Trump’s address, Vice President Mike Pence met privately with House Republicans, urging them to “stand strong” and insisting the White House wants to negotiate, people familiar with the conversation told the Associated Press. The White House said Trump and Pence will meet with Republican senators at the Capitol on Wednesday.

There is doubt among Democrats that a wall would do much to solve the issue of illegal immigration, with Congressional Democratic leaders, Sen. Chuck Schumer and House Speaker Nancy Pelosi, arguing the wall would be “ineffective” and “unnecessary.”

Rubio, the son of Cuban immigrants, sought the GOP presidential nomination in 2016 but ultimately dropped out after losing the Florida primary to Trump.