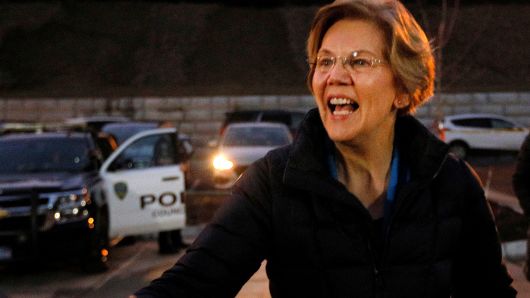 Sen. Elizabeth Warren’s nascent presidential campaign has so far drawn attention to the DNA test she took in hopes of proving her Native American bloodline, President Donald Trump’s Twitter attacks against her, and whether or not she is “likable.” Her potential impact on the policy issues that will shape the 2020 race has received far less attention.

As Warren stumped across Iowa last weekend, reporters asked her whether she’d take money from billionaires, how she planned to talk about her gender and whether her campaign was similar to Hillary Clinton’s. But not about U.S. plans in Syria, immigration or the volatile stock market.

Still, while the Massachusetts Democrat has yet to release a formal platform, certain key issues are coming into focus as she steps further into the national spotlight. On at least two of them, Warren is already running the table against other potential Democratic 2020 candidates.

The first is corruption and the lack of transparency in government, and more specifically within the Trump administration. The second is changing the laws that govern U.S. businesses to make them more favorable to employees and consumers.

Both are subjects that Warren is uniquely positioned to tackle, given her experience as a Harvard law professor. And either of them could alter the tenor of the next presidential election, regardless of whether Warren wins the nomination or not.

Two years into Trump’s first term, the promise he made at nearly every campaign rally to “drain the swamp” in Washington and restore accountability has quietly disappeared from the president’s speeches.

At the same time, more than a dozen of Trump’s Cabinet appointees and top aides have left their jobs under a cloud of investigations and scandals — not to mention scores of others in Trump’s wider orbit who have been indicted in connection with the special counsel’s Russia probe.

Among Democrats expected to run for president in 2020, Warren is uniquely deft at explaining the Trump administration’s conflicts of interest and ethics problems in a way that’s clear and easy for voters to understand.

During a speech in August, Warren described one such official, Commerce Secretary Wilbur Ross, as a “cartoon version of a Wall Street fat cat, awash in financial conflicts, intertwined with Russian financial interests, suspected of swindling millions from his business partners and using his official position to pump up his fortune through shady stock trading.” Ross has denied what he calls “unfounded allegations” against him.

Warren has also backed up her words with action. This fall, she introduced sweeping new ethics legislation, no doubt with an eye toward her 2020 campaign platform. The Anti-Corruption and Public Integrity Act would place a lifetime lobbying ban on former presidents and vice presidents, Cabinet secretaries, members of Congress and federal judges.

Another Trump-centric measure would require presidents and vice presidents to place some assets, including their real estate holdings, into blind trusts they have no control over them. Trump has refused to divest his interest in his family real estate business, and instead left his sons to run it while he is president.

To be sure, hammering Trump over his ethical issues is unlikely to hurt his poll numbers among his loyal base. But for independent and swing voters, including those who may have voted for Trump in 2016, the near constant scandals that have marked his first term in office have left people disillusioned.

In December, Quinnipiac’s large monthly tracking poll found that only about a third of voters still believe Trump is honest, while more than 60 percent said he does not share their values.

Few Democrats are better equipped than Warren is to turn this blur of scandals and cynicism to their advantage.

When Warren arrived on the national scene, America was still in the throes of the 2008 financial crisis and eager for someone who could punish the banks, insurance giants and Wall Street firms that had made billions of dollars on risky loans, then demanded taxpayer-funded bailouts when those loans went bust.

Warren fit the bill, and the instrumental role she played in creating the Consumer Financial Protection Bureau helped make her into a sort of anti-Wall Street folk hero.

Ten years later, however, the economy has recovered, and the days of occupying Wall Street seem long gone.

In this new political environment, Warren now seeks to occupy an economic middle ground, albeit one that’s left of center, by emphasizing that it’s the rules of the capitalist game that need to be changed, not the whole game (a la Bernie Sanders).

“I am a capitalist,” Warren told CNBC’s John Harwood during an interview last summer. “I believe in markets. What I don’t believe in is theft, what I don’t believe in is cheating. That’s where the difference is. I love what markets can do, I love what functioning economies can do. They are what make us rich, they are what create opportunity. But only fair markets, markets with rules. Markets without rules is about the rich take it all, it’s about the powerful get all of it. And that’s what’s gone wrong in America.”

Warren’s argument that markets are good, but that markets need rules, also plays to her experience — after all, she helped to craft many of the post-2008 era’s banking and financial regulations.

As the leading consumer advocate in the Senate and Wells Fargo’s toughest critic, Warren is well positioned here to take on potential Democratic rivals like Sanders and Sens. Kamala Harris of California and Cory Booker of New Jersey.

Warren is also a powerful voice for the rights of workers, another issue that’s been amplified in recent years by wage stagnation, campaigns like the push for paid parental leave, and a renewed focus on work-life balance.

This fall, Warren introduced the Accountable Capitalism Act, which would require, among other provisions, that employees be given seats on the board of directors at some of the nation’s biggest companies.

And while each of Warren’s Democratic rivals has a unique set of policy issues, none of them is as well versed in how the economy impacts individual consumers and employees as she is.

And none of them has so far laid out policy plans that are as well tailored to Trump’s political weak spots as Warren has.

Despite Warren’s strength and depth of experience on the two key issues above, at least one policy area could spell trouble for her candidacy: foreign policy.

But Trump’s defiant isolationism seems to have backfired: The percentage of Americans who believe the United States has a special responsibility to be a world leader is 11 points higher than it was in 2010. In practice, Trump’s approach to foreign policy has often been defined by his rash decision-making, his transactional values system and his casual willingness to rip up longstanding alliances.

Warren, like most Democrats, has been quick to criticize Trump’s methods. But she shares his skepticism of the wars in Iraq and Afghanistan and supports the return of U.S. troops from both theaters.

In November, Warren wrote a major essay in Foreign Affairs magazine, where she described the Middle East as a “tangled mess,” and concluded that “neither military nor civilian policymakers seem capable of defining success, but surely this is not it.”

Warren did not, however, offer her own vision of what success in the region would look like. And absent this vision, Warren, like Trump, seemed to favor withdrawal without an emphasis on longer-term strategic objectives.

But she breaks with Trump over who globalization’s real winners are: For Warren, it’s massive corporations and a tiny global elite. Trump, however, claims the real beneficiaries are America’s adversaries (and occasionally its allies).

Of course, it is impossible to predict how future events will affect what voters consider to be important issues when they go to the polls in two years. A major international incident could elevate foreign policy overnight, while a scathing report from special counsel Robert Mueller about Trump’s business ties and Russian election interference could make corruption the defining issue of the next election.

The good news for Warren is that by launching her campaign earlier than her rivals, she has time and space to refine and amplify her policy platforms.

For now, though, she seems more intent on shaping an overarching message than she does on hammering out what exactly needs to be done.

In Iowa last weekend, Warren essentially had the crowded Democratic primary stage to herself. But rather than drill down on policy, she made a sweeping pitch for change.

“We can talk about a lot of these pieces, but I want to put an idea on the table,” Warren said in Des Moines on Saturday. “And that is we need change, and not just one statute here or one law there. … We need big structural change.”